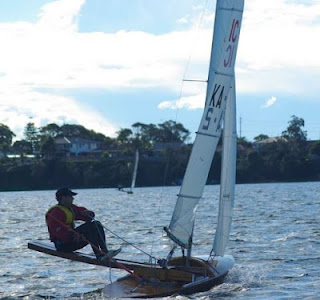 Well, the beginning for me. There is ample information about sailing canoes posted around net which chronicles the beginnings of these now rare watercraft, but essentially there are canoes with sails, and sailing canoes. Placing a sail on an open paddling canoes often takes spectators by surprise, as they seem the least likely hulls to try and sail. Nevertheless, with a leeboard (or two) and either a rudder or paddle for steering, they are tremendous fun. Sailing canoes, however, came into existence as the hulls began to be developed more for sailing and less for paddling, culminating in the International Canoe, or IC, or 10 square meter class of sailing dinghy shown above.
The modern version traces its roots to the early days of canoe sailng, which saw many innovations, such as the sliding hiking seat which allows the skipper to use their weight outboard of the boat, to balance the force generated by a large suit of sails, 110sq feet  typically.
﻿﻿﻿﻿
The above photo, taken at Killbear Park on Georgian Bay, demonstrates the differences between an open canoe rigged with a lateen sail, and a decked sailing canoe with hiking board, namely a replica circa 1913 sailing canoe from the 16 30 class. Early in the last century, this class was extremely active and under development as some stability was added with the caveat that boats be no longer than 16feet and no wider than 30inches, carrying 90 feet of sail on two masts. Until around 1930 when the British caused planing hulls and sloop rigs to alter the class, this setup prevailed.
John Summers, then of the Antique Boat Museum, made it possible for several of us to build replica boats of our own, as original 16 30 are typically rare, which puts their cost at a premium, and often fragile due to their age. Add to this that the majority of period boats were round hulled, making for a steep learning curve when one is first learning the subleties of handling one. John took the lines of a hard chined boat that resides in a museum collection, and develped it for modern construction. When offered the opportunity of a spot in this endeavour, i couriered a cheque immediately. Suddenly towards the end of 2007 there were 5 similar boats, and  the current revival of sailing canoes was well underway. Plans are available from the museum, Abm.org, for anyone wishing to have one. I`d  be happy to build one for any prospective new sailor...

﻿
What led me to John, and ultimately the fascination with this now historic class...﻿ ﻿﻿﻿﻿ 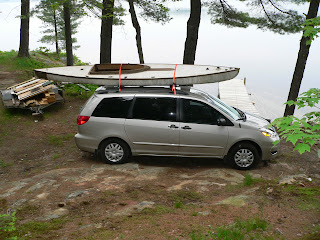 More later on this boat, and how i scratched my wifes new week-old van....

This sailing canoe was discovered abandoned in the woods in Eastern Ontario, amongst other boats and rowboats left behind by earlier generations. While the other boats had long since rotted and were becoming part of the forest floor, this one suffered a kinder fate. Placed in the woods decades earlier, it had been turned upside down and placed on two boulders, off of the ground. Due to its robust construction, it had not hogged or lost its shape, and as it was built to be canvas covered it had shed much of the water and snow. It was naturally waterlogged, and it took great effort to load it. Home it went, close to 300pounds on the roof rack, and on taking it off the help i enlisted was unable to hold it up but miraculously never dropped it.
The canvas was removed so it could begin drying. 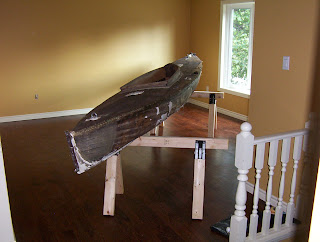 As we were in the process of moving, and not wanting to lift it again, i of course placed it in a position of prominence in the new house. We had taken the house early to paint and renovate, so it was tolerated for the time being! 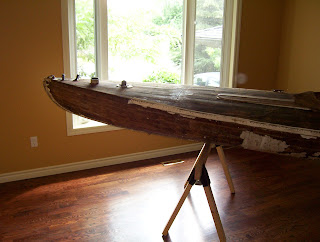 Really though, i thought it was a great piece but was quickly voted down and it would find its way back to the garage. No matter, I was hooked. A genuine sailing canoe, and not knowing much about them I began to make inquiries......

Another two shots of the same boat i found while looking through old files. This old boat will get a new lease on life this winter, hopefully to splash again this spring or early summer. 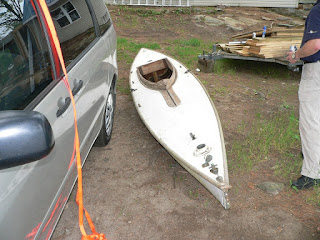 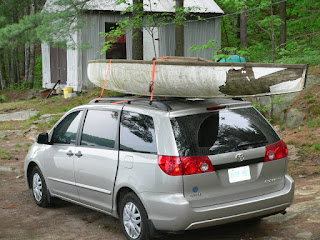 Second bet thing the Toyota has ever hauled, behind kids. Pre - trailer days when everything got hoisted on the roof. Soaking wet and covered in canvas, it easily lost 100+lbs when it was stripped and dried out. 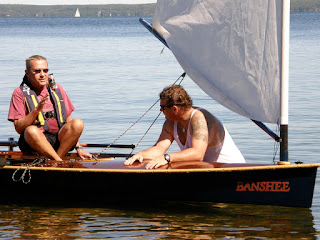 Another great shot i found while going through old files, getting pointers from Jan Gougeon of Gougeon Brothers, manufacturers of West System epoxies and developers of the wood epoxy saturation technique. Brothers Jan and Meade have been to the Paddlers Rendezvous at Killbear Provincial Park many times and are great sailing canoe enthusiasts, however they tend to favour cruising over the wet, racing style 16/30s. Jan still enjoyed my boat, and put it through its paces. 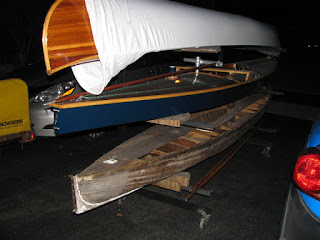 A rolling rack of happiness.. 16/30 replica, original sailing canoe below awaiting restoration, and a glossy cedarstrip up top.