The weather has been so nice and the bugs are still weeks away, so before the snow tires get put away we took advantage of their weight and canvassed a Prospector, Guide and Chum yesterday. After the preservative has dried on the canvas, they will be filled and set aside until they are ready for prime and paint. 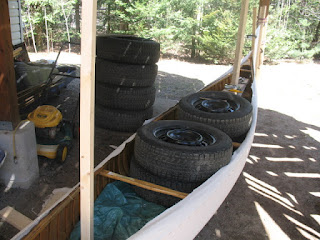 The unmistakable stem profile of the legendary Chestnut Cruiser, 17.5 ft in length. Currently my favorite canoe ( and likely to be for some time) these boats are a fantastic combination of carrying capacity, maneouverability and speed. 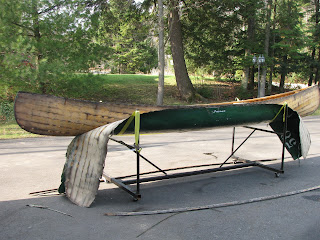 This old girl has a great history with Canada's oldest canoe tripping camp, and has seen a lot of miles over the last 24 summers. Still in its original canvas and with no repairs to date, its a great example of a Chestnut canoe. But why does it say Fraser on the side in Chestnut-style script? 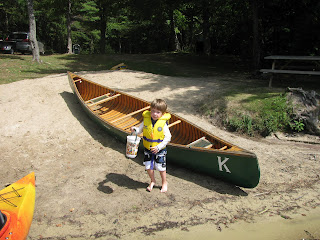 Through the generosity of another canoe builder, we were able to acquire this boat and add it to our personal collection. It is a constructed as a guide model, with heavier ribs, wanigan ribs and carry thwarts as ordered, and was built by Don Fraser, Chestnuts last salesman who, upon learning of the company's demise in 1979, acquired several forms and began production of his own on a limited scale to supply the camp. 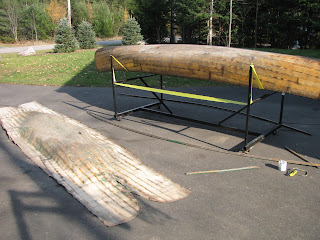 Several patches and lots of sand attest to its use throughout the years of campers tripping north, and its restoration included backside repairs to 5 ribs, and the replacment of close to 20' of planking. Remarkable shape for the use its seen, and we left all of its scars and scrapes as a testament to its service. We'll update its progress as it nears completion.

Consider picking up the definitive history of the worlds oldest canoe trip camp, we cant say enough about the quality and sheer number of photos and stories it contains.
http://www.ottertooth.com/keewaydin/admin_K/book6.htm

Great mild weather and no bugs, perfect for filling canvas in preparation for paint and finishing 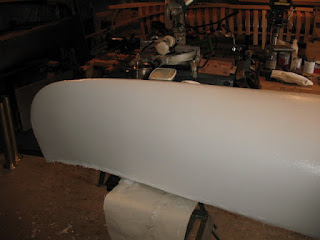