Its hard enough to get in the habit of blogging, but a move and setting up a new shop along with everything else will keep it far down on the list. Top of the list has been taken by the necessity of a new workspace. After finishing some painting and new flooring in the house, the tempered glass-top desk we'd been using decided to explode with enough energy to approximate a gunshot, the entire 2'x4' piece of 1\4" glass scattered itself over the entire room, dumping a laptop, camera and all in one printer to the floor in a hail of broken glass. For some 5 years now I've been carting around a 6' slab of walnut a friend gave me after his fathers passing, and I've never found a project worthy of it until now. Repurposing the desk frame, it will be planed, trimmed and several build coats of epoxy bar top coating applied to make the kind of desk people would expect someone who works with wood to use. 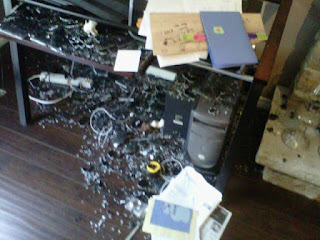 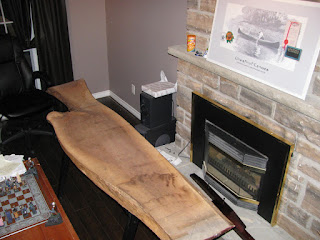 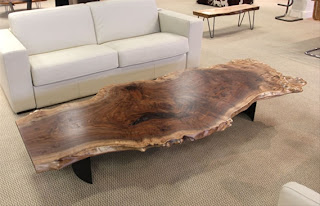 It will be trimmed for length, the live edges left and a small ledge put on with the offcuts to lift a printer up leaving room below for paper and so on. Tempting as it was to make a coffee table, we dont drink coffee and it wouldnt really fit in. There are some terrific examples however.
More to follow, it will really pop once its dressed and oiled....

Maybe it was bad luck leaving Muskoka, or maybe just movers not taking care. On dismantling the table, one of the support bars was bent slightly, therefore there was no support for the glass over 18" of the middle - a time bomb waiting to go off, and it did. 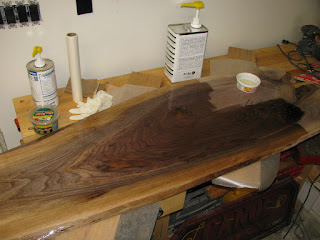 Board is dressed and the first coat of epoxy put on. It will get several more to build up a tough top coating with lots of depth, then sanded and coated. 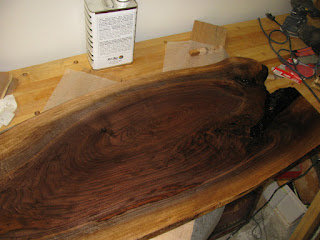 Holes filling in, and the trapped bark and outer layers are stabilized and filled.  One incredible slab of walnut. Almost done... 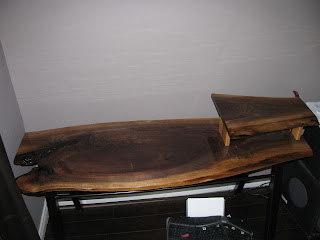 One more coat of epoxy, buff and coat and I'll have a great place to blog from. Oh, and pay bills and help kids with homework and so on. Not sure about the walnut striped uprights, likely block it up with solid walnut like the shelf.