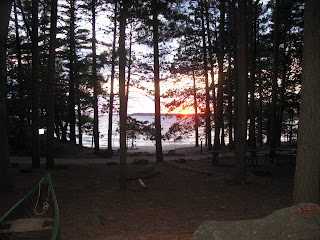 For the past 15 years, there has been a Paddlers Rendezvous at Killbear Provincial Park near Nobel, just outside of Parry Sound Ontario. A low key, loosely organized gathering which varies in attendance year to year, and occaisionally produces a new boat, either a first time attendee or a newly completed project someone has brought.  Typically held the weekend after Labor Day, the event is open to all. More posts will follow with photos from previous years, however this year was subject to heavy rains which limited attendance, as well as activities. Nevertheless, it is Georgian Bay and not much short of lightning or a hurricane will keep me off of it. 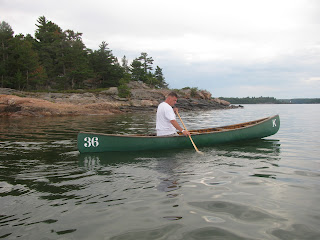 This year, part of a project for the upcoming 2013 WCHA annual assembly, i donated a Chestnut Cronje - a great cruiser used for tripping by Camp Keewaydin, the oldest canoe tripping camp in existence and operating in Canada out of Temagami. The boat left for Massachusetts with friends that will completely restore it in time for it to be auctioned off, to raise proceeds for the organization. This boat was built in the mid-sixties, and has had a hard life and many thousands of miles of trips, summer after summer. Retired from the fleet of wood canvas boats the camp still uses and maintains, its one of several we have. 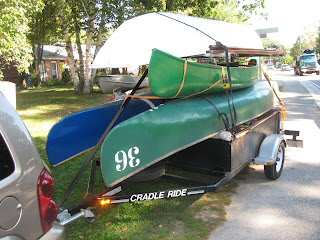 What the heck found its way on the trailer? A Mirror dinghy for free, but turned out to be too rotted to warrant the work to bring it back, so it has a date with the sawzall. The rig will be kept, but the boat is gone. The little boat in John Deere green seems to be a Peterborough Mermaid, or perhaps a Chestnut Playmate - we'll likely know for sure once its stripped. Found on a yard with a for sale sign and half full of water, it had to come home with the rest. 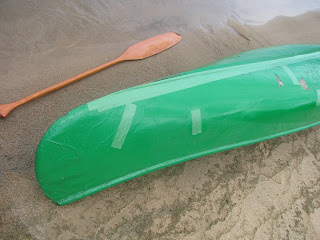 Not one to leave things alone, it had to be paddled! Problem was, the canvas was split along the keel the full length of the boat. Luckily we had duct tape, or as i like to call it, race tape or hundred mile-an-hour tape from its applications on the oval tracks holding racecars together on Saturday nites after they traded paint. A mere 26' of tape and we were off. The canoe got lots of use, as at 14' they are not common, and it was a very stable, responsive and well behaved boat for its size. 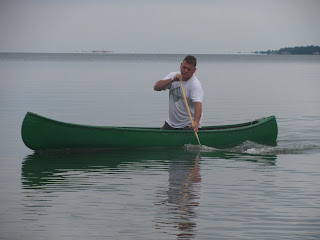 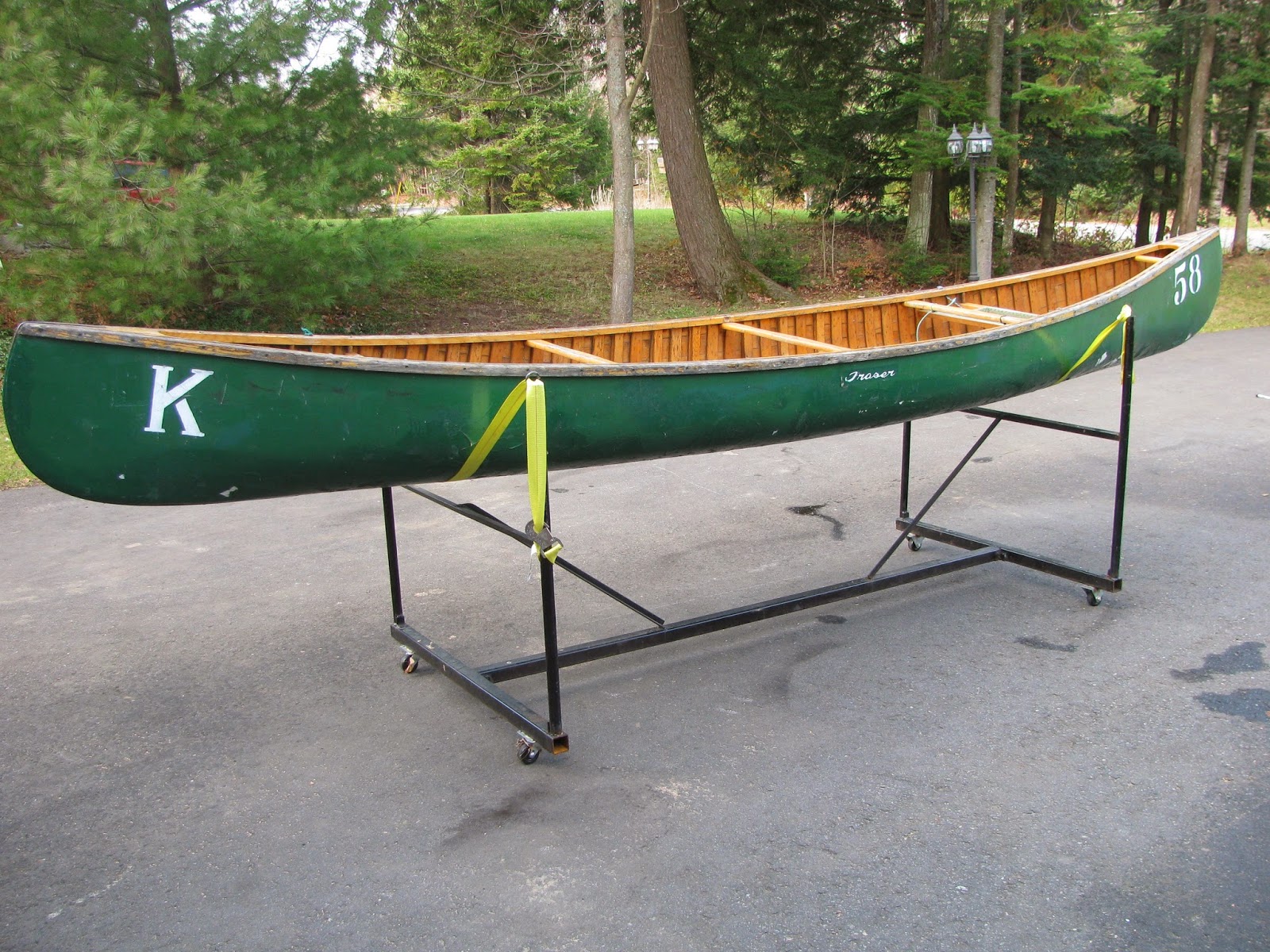 Out of Camp Keewaydin's fleet in Temagami, this boat has been on numerous long trips, however unlike the majority of their boats, this one had not been rebuilt/repaired, and was as it was delivered in the mid-'80s. It was due for a recanvas, and some repairs. 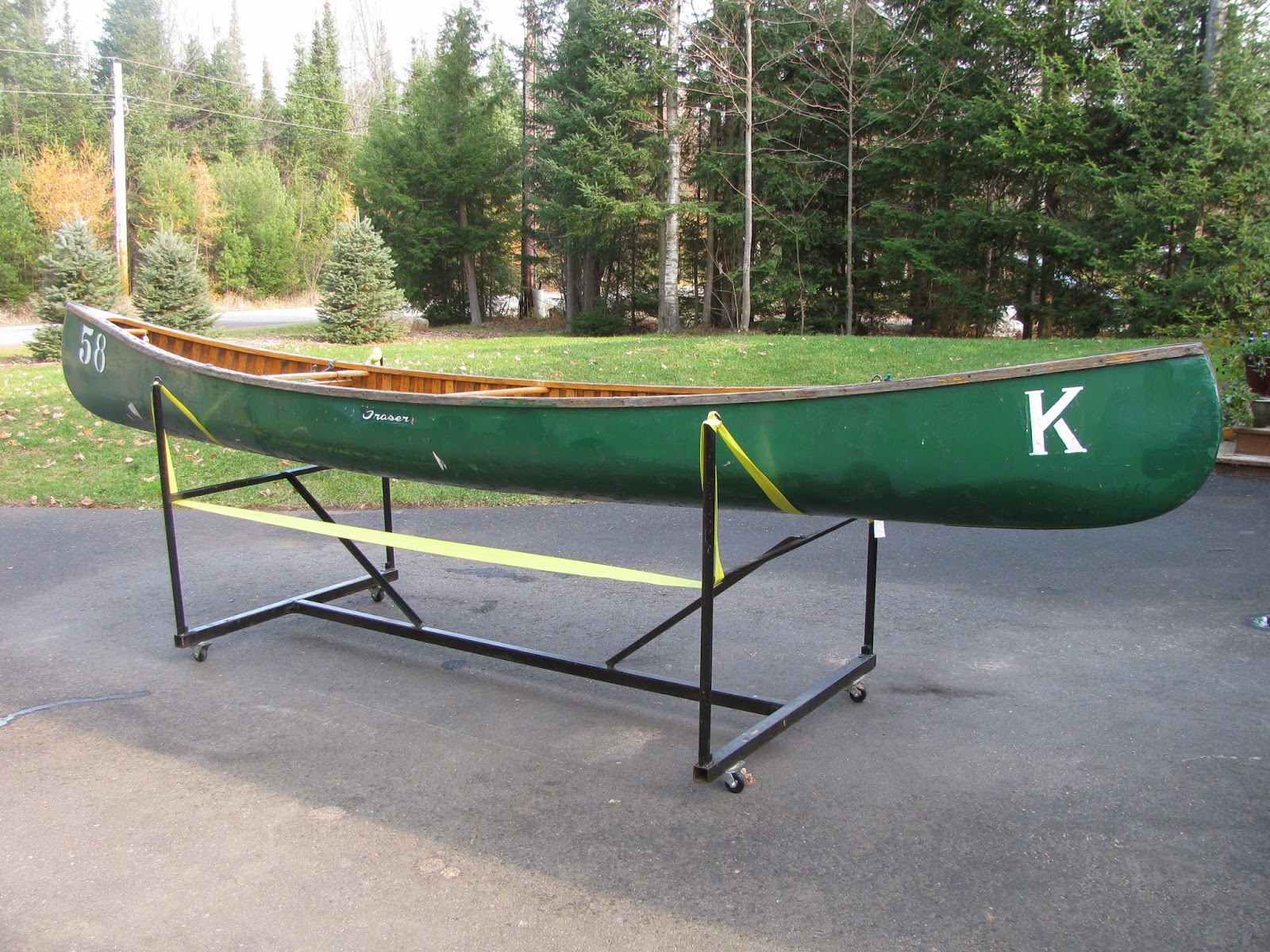 Donald Fraser had been the sales manager at Chestnut when they closed their doors in 1978/79, and with great foresight purchased several of the more popular molds, among them the Cronje and Prospector. 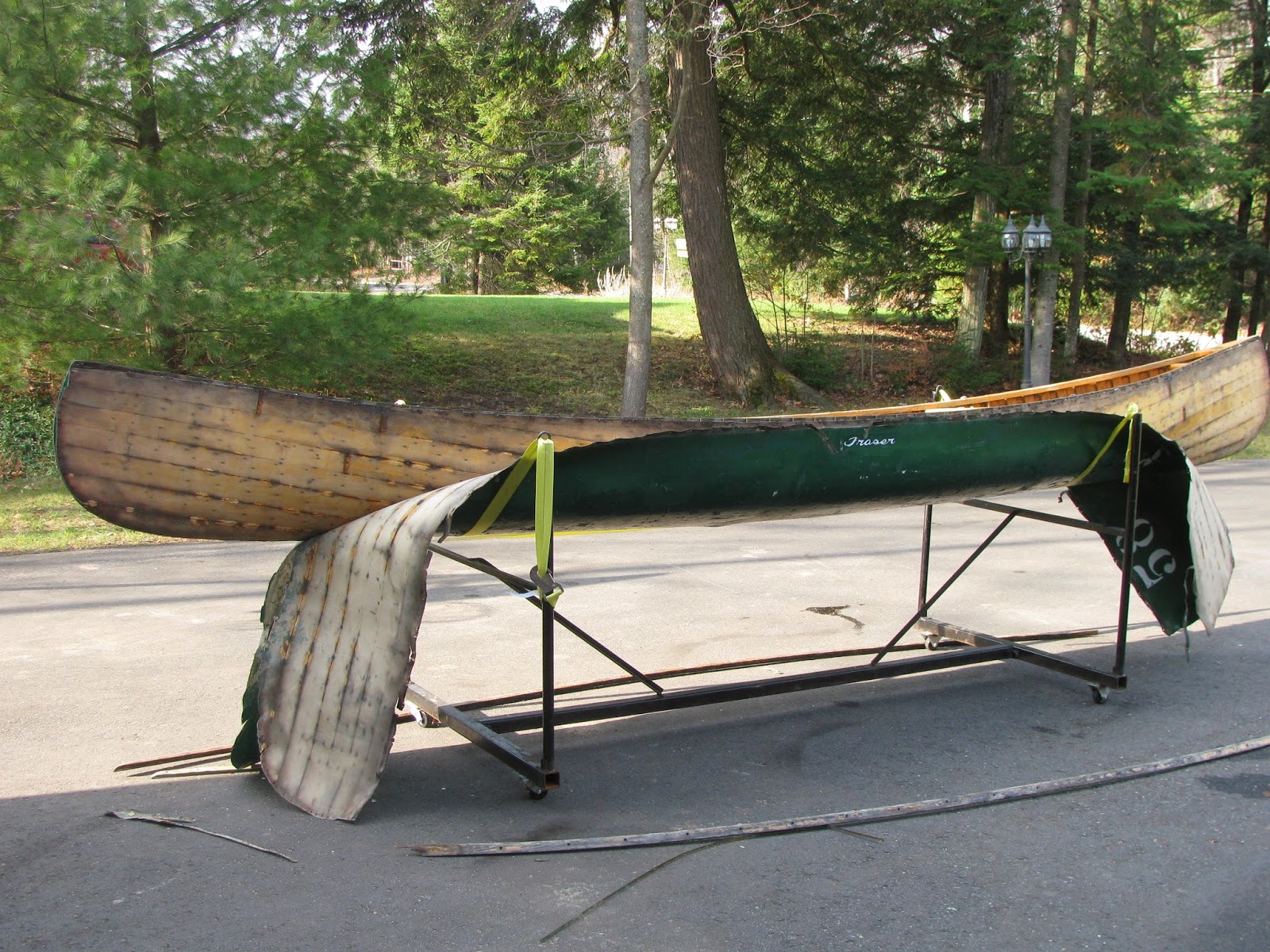 He the continued to build and supply Keewaydin, the oldest canoe tripping camp in Canada, who still use cedar canvas canoes to this day. With Chestnut gone, he filled the void for some time. 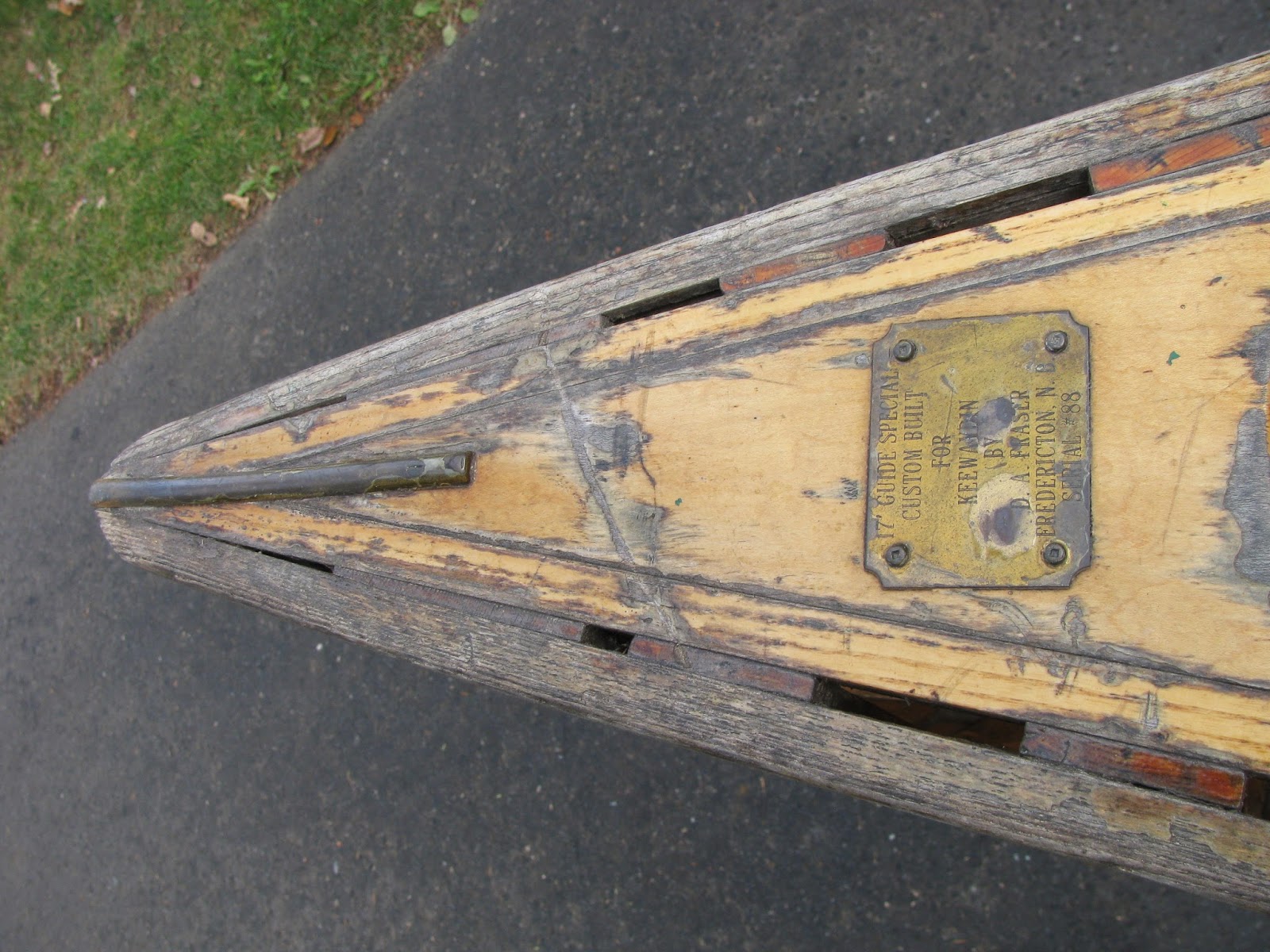 The boats are very well built, and of a higher caliber than Chestnut had produced in some years, owing to him being able to control every aspect of the build in a somewhat unhurried fashion, compared to factory production 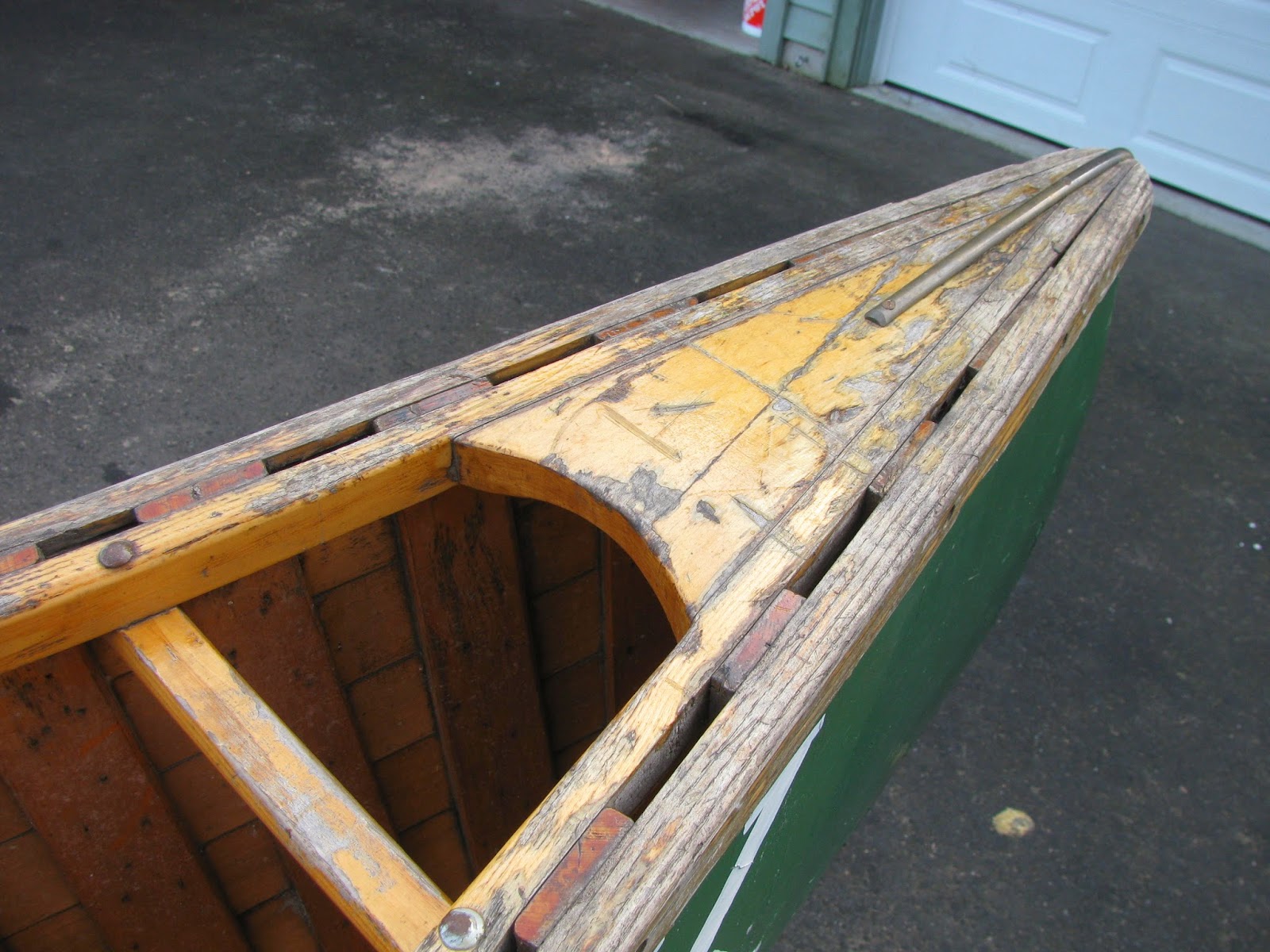 Carry thwarts, unusual to Canadian boats but spec'd by Keewaydin 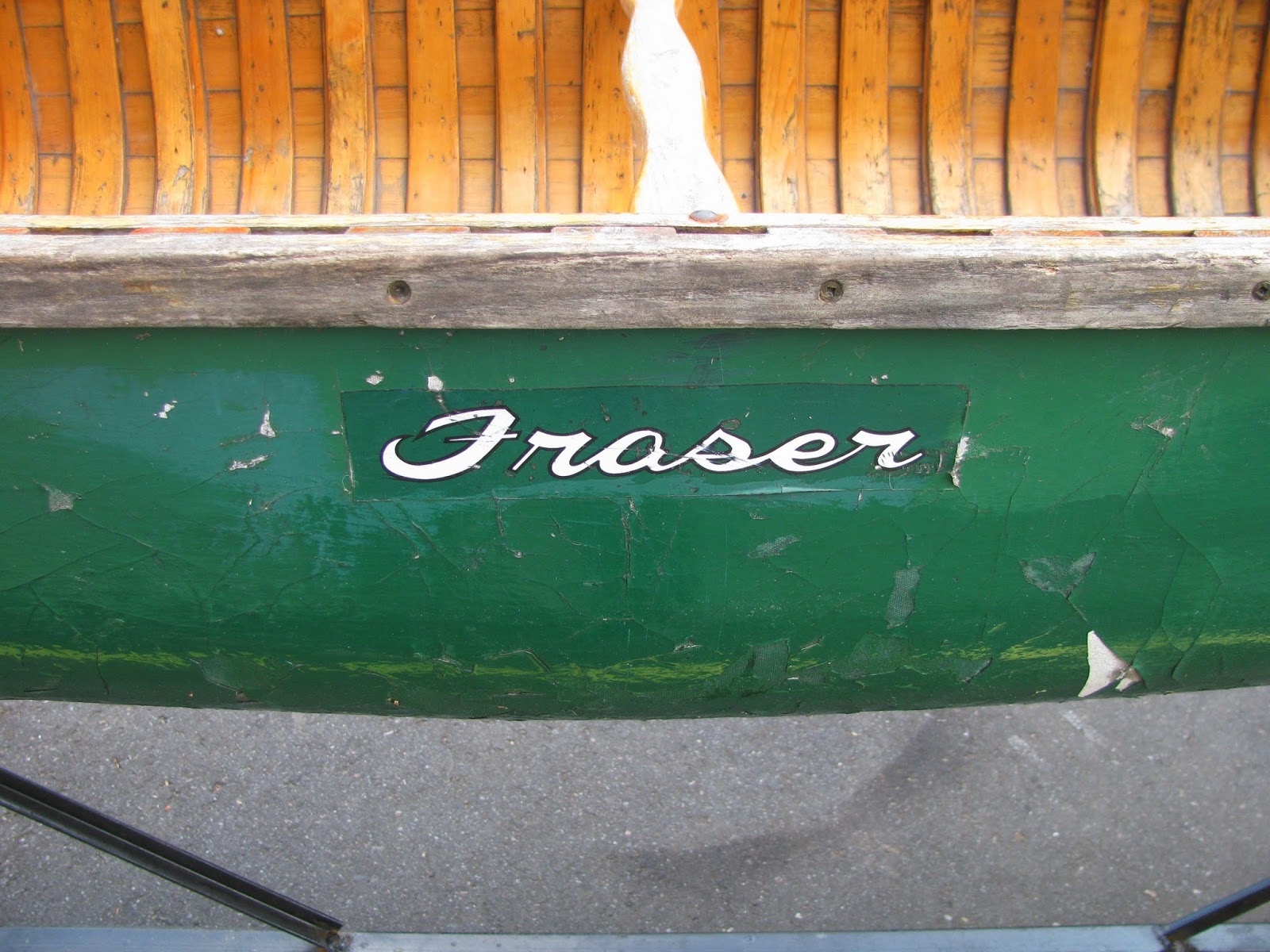 Fraser script, a similar font to the one Chestnut used in the 60s and 70s. Mr Fraser gave permission to reproduce the decals, so now we can complete any Fraser canoe we work on to the way he shipped it. 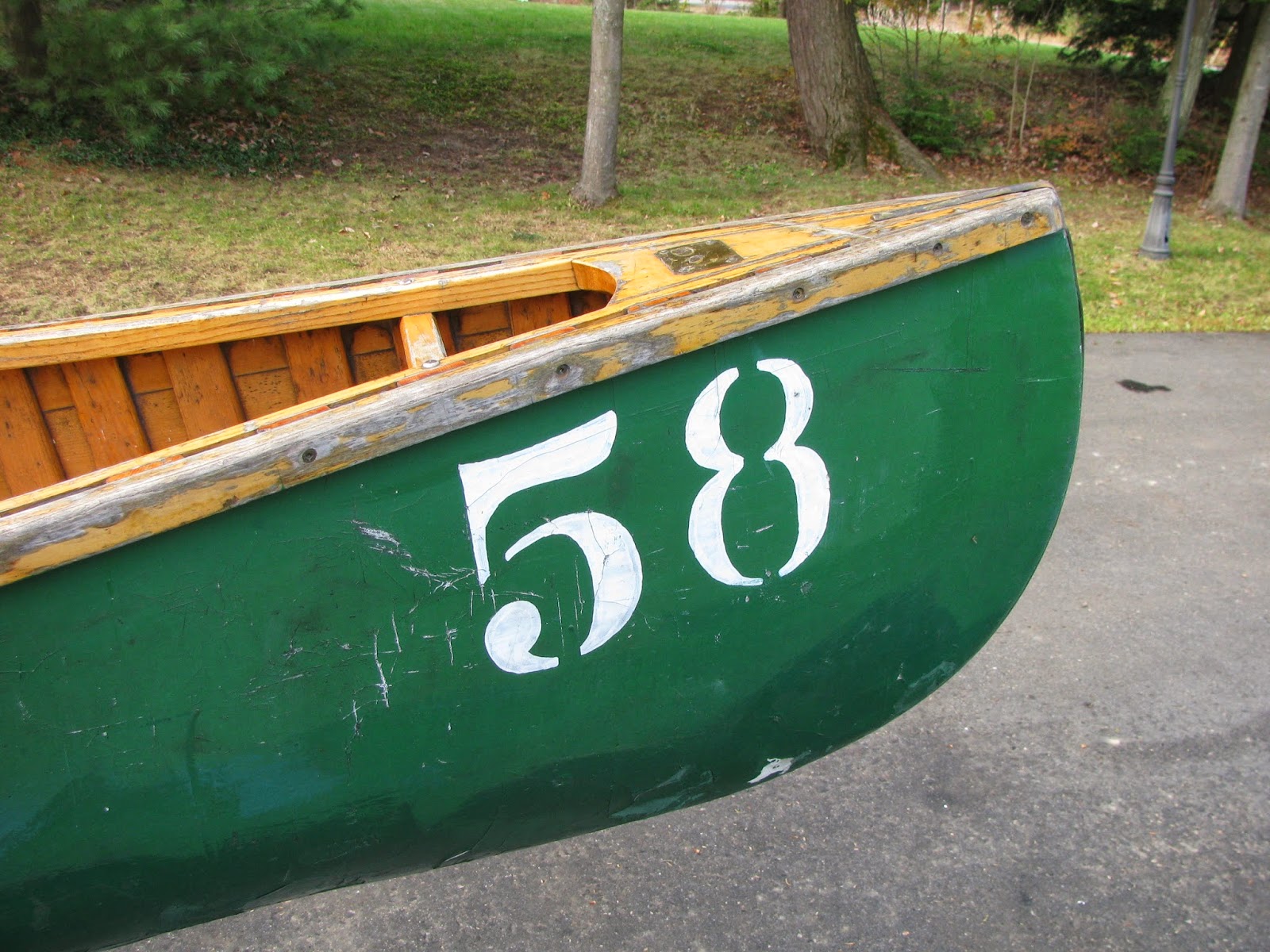 Fleet number on the bow, K on the stern per tradition. 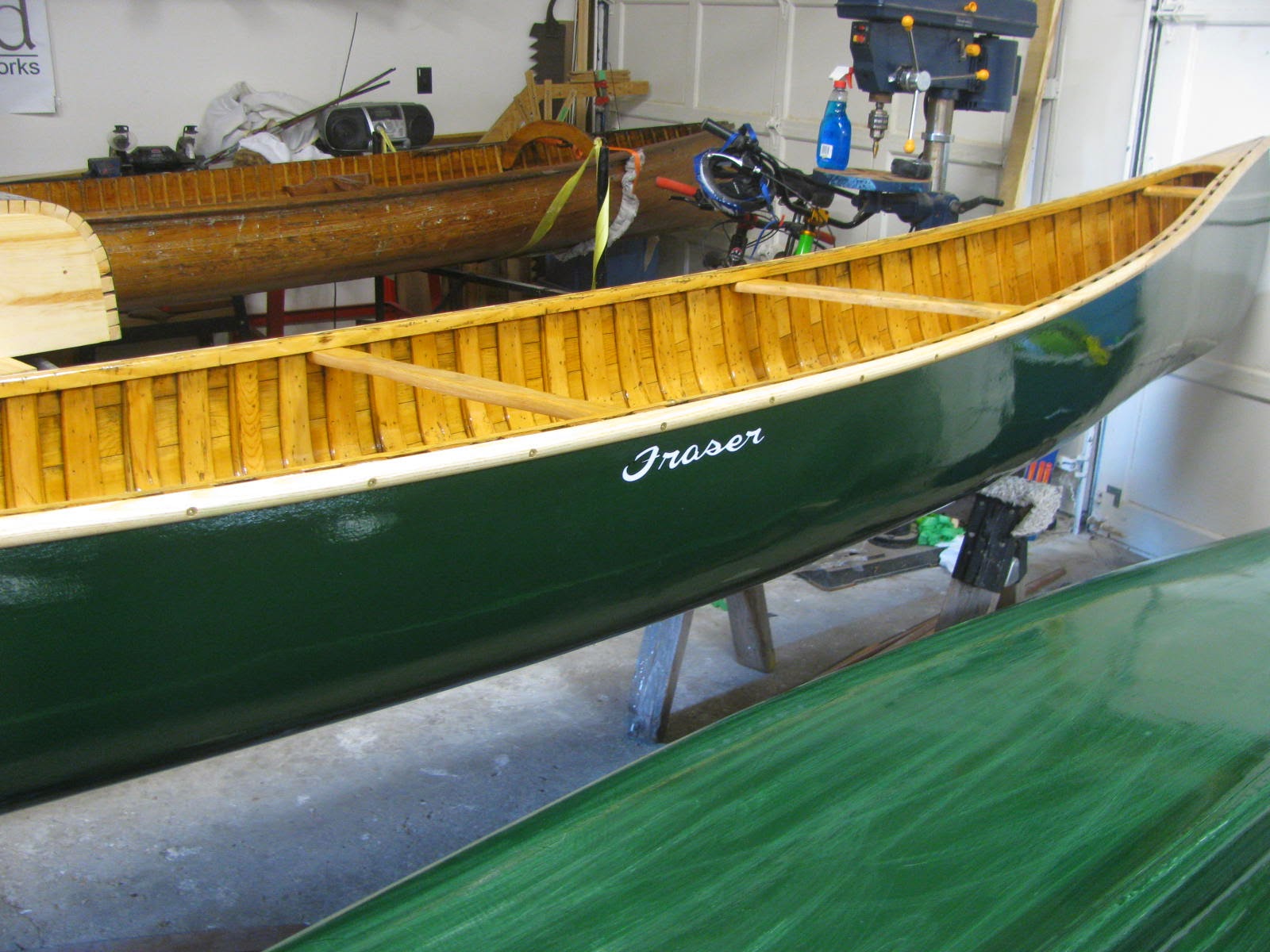