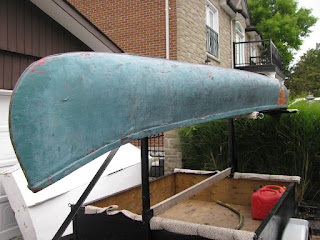 Another customers boat has come in, this time one of my favourites. My own model 1492 has found a new home, so this was  like reminiscing to begin work on this one. Meeting up with the owners and viewing the boat in person, my suspicions that it was 'glassed were confirmed 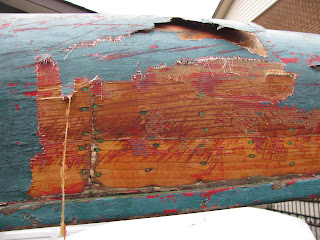 Luckily, however, as was typical with boats that were fiberglassed in place of the canvas it had been coated with polyester resin common during the period, which often is applied by amateurs and is adhered poorly. A few test pulls confirmed that the boat would strip with some effort, so home it came. 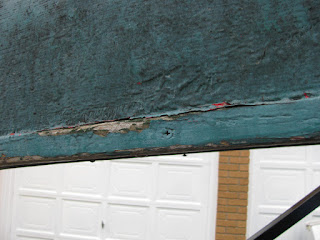 Polyester resin, used for most fiberglass applications from tubs and showers to enormous cruisers and sailboats, is a catalyzed resin system, meaning that as it is applied to the weave of the fiberglass to fill it and give it strength, it has had hardener added which sets off an exothermic reaction and it cures rapidly. Because of this, it rarely has time to adequately penetrate the wood, and so often detaches in many places, if not entirely.
Unlike epoxy, which is widely used in boatbuilding and to encapsulate wood, it has little time to adhere the glass cloth or strands to the substrate. Epoxy, however,  takes up to 24 hours to fully harden, allowing it to saturate the wood fibers, making removal difficult to impossible. This presents some real challenges for restoration, often meaning the boats are not able to be brought back to their original condition. 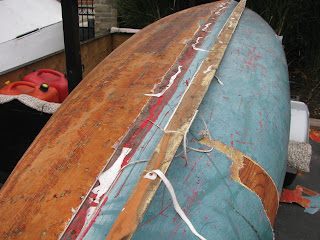 Using a few tricks, the glass was removed and the boat returned to its condition as it left the building form, before the canvas skin was applied. Many owners have applied glass to an older boat as the canvas is no longer serviceable, in an attempt to render them watertight and more durable. Unfortunately, wood canvas boats and canoes rely on the two materials to be independent of one another, allowing the boat to flex  and move, as well as to breathe and prevent rot. Glass on one side traps moister, and even cedar can be made to rot. 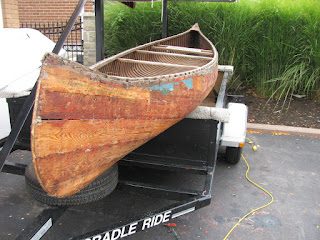 One benefit that has been found, however, is that a fiberglassed canoe or boat will typically keep its shape due to the rigid outer coating, which  preserves the shape and lines of the boat. This one is perfectly straight without any  twisting, bulging or movement which often occurs in the 70 years or so since they were first built.
One consequence, however, is that with the increased rigidity of the hull, ribs will crack where in its original configuration they may have simply flexed. 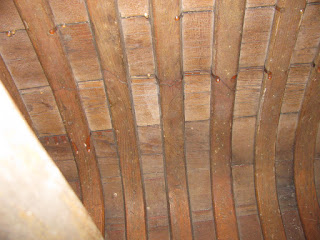 This old girl has 9 or 10 cracks, but as none has bulged out or distorted the shape they will have backside repairs done rather than bend in new ribs, which would not have the same wear or patina and somewhat spoil the look of the interior. 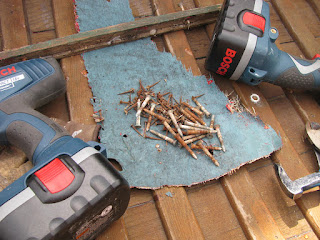 Typical of the period, this one had its share of steel, mostly remanant of the old canvas under the gunlwales, and gunwale screws. Steel is never a good choice, as not only does it rust but the surrounding wood typically deteriorates along with the fastenings. 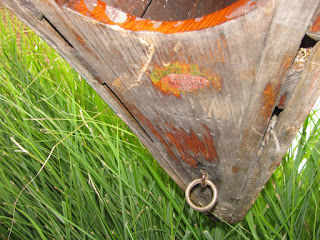 This Champlain bears the marks of the previous owner, and tie it to a camp on the French river and so will be preserved. The boat appears to be planked in Western Red Cedar, with matching decks. We'll know for sure once its stripped and bleached.
More to come..... 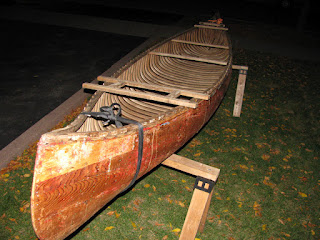 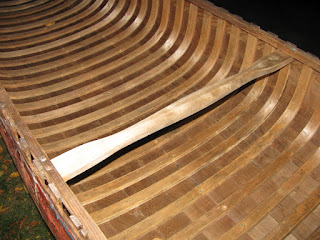 Boat is stripped, and like my recently sold Champlain is planked in Western Red Cedar, which makes for a nice contrast against the white cedar ribs. As the boat is 70+ years old, it has acquired a lovely patina as the wood has aged, along with the usual wear and a few scars from use. A great paddling boat, with a moderate amount of rocker, model 1492 Champlain canoes are narrower than todays boats, and rounder. A great experience to paddle, they are much livelier than many of the current designs, although of smaller capacity. 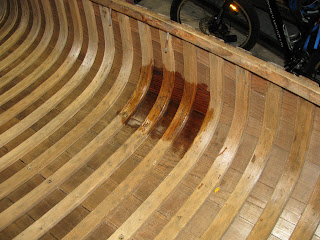 So hard to resist, a small section was oiled after bleaching to put some moisture and colour back into the hull. Varnish will add more colour and depth, but this is a good preview of whats ahead. 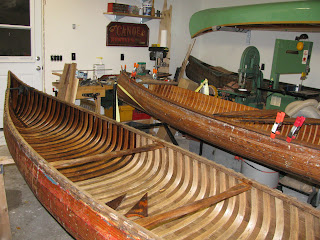 With half done, the contrast of red cedar is evident. Bow deck shows the outline of the oval Peterborough decal which will be renewed as well. 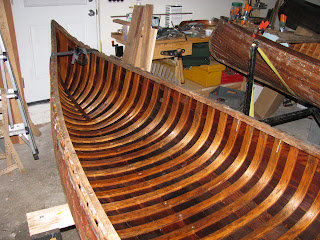 Next up is re-installation of the decks, seat repairs and backside rib repairs on 8 ribs. New ribs could of course be installed, however as none distort the hull, due in large part to the fiberglass, the old ones will be left in and so the look  of shiny new ribs is avoided, as well as avoiding any chance of knocking the hull out of shape.
Its been a while since the last post, and we've been busy! 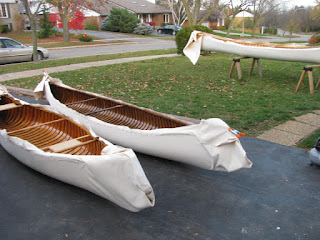 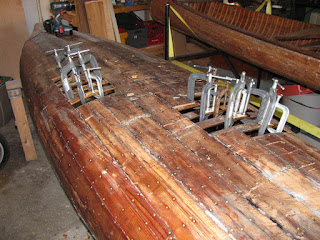 Backside rib repairs, our preference when a rib is broken but not shattered or coming out of the boat. The original rib and fastenings are much prettier than new ribs, which although they can be stained, still stick out. After strengthening, the ribs are faired and planking put back on, without showing that the boat has been dismantled or disturbing the patina acquired over the last 70 years. 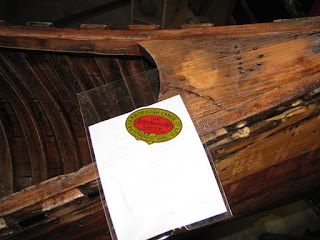 A new decal will go in place of the old one perfectly, completing the restoration and paying homage to the boats original manufacturer. A nice touch to a completed boat. 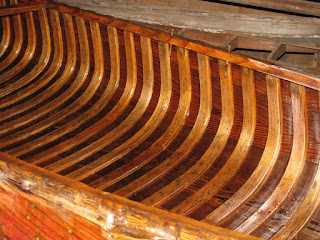 We've had several Champlains with red cedar planking, and they make for a very pretty boat. 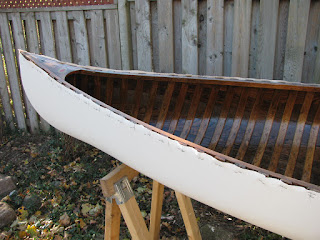 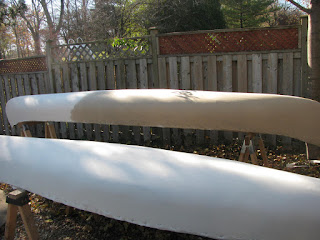 Two recent in-progress restorations having preservative applied to the new canvas, to ensure long life. Although filled and painted, the cotton canvas will rot out quickly without some sort of treatment to protect it. 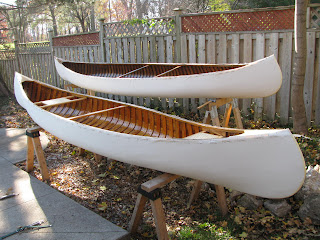 On their way to filling and paint, Champlain (background) and an older Langford. 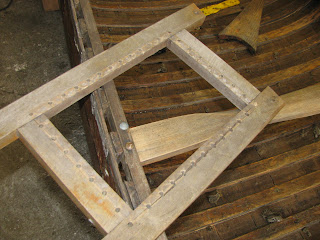 Stern seat was cracked all along the holes, to be repaired. 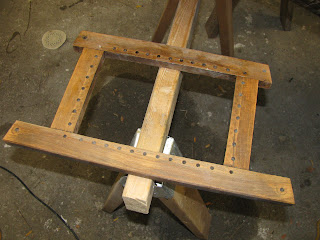 Upon removing clamps - holes will be opened up and frame sanded and varnished prior to caning. Although an easy repair, it not only prevented having to make a new seat but aside from the outer gunwales there will be no new wood in this boat, so overall it retains the same patina and colour throughout. Not bad for 70 years old. 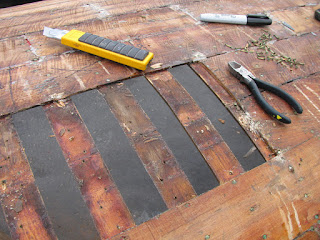 Cracked ribs, that the fiberglass held in place and did not allow to deform the hull. with the planking back on there is nothing to suggest it was ever tampered with. The cracks are still visible from the interior, however after repair are stronger than the other original ribs. Fairing them, and the planking when back on, ensures no hull deformity. 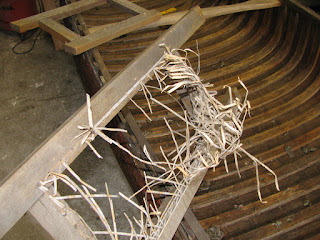 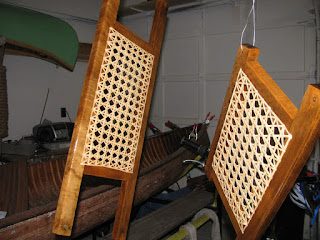 Newly caned and varnished seats - some of these old boats have the koolest lumber in them. Thousands of boats, countless lifts of lumber and still the odd piece of birdseye or curly maple shows up in the most unexpected places. 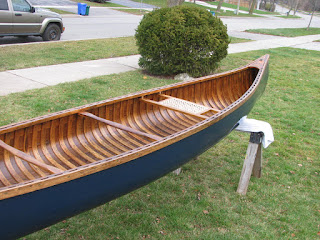 Done, in a custom mix of navy at the owners request, it shows off the boats lines well. 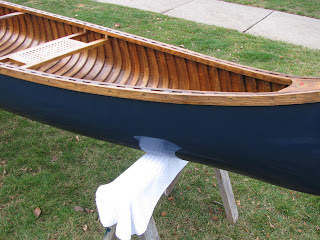 Deep gunwales went back on, as the fiberglass had affected the top row of planking, keeping it farther below the rails than normal, so the gunwales were kept longer to cover the fastenings. Replacing the planking was not an option, as it would have been difficult to match the tight grained 70yr old red cedar planking. 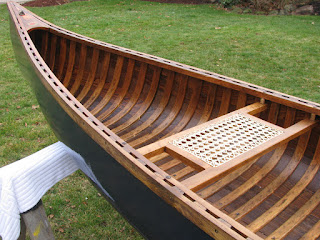 Varnish was overlaid with matt finished varnish to dull the shine and better show off the interior in a more subtle way. 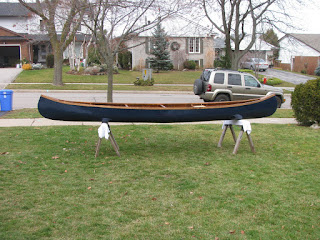 Just waiting for stembands, and its done.