Found locally, less than 10 miles away is a 1926-28 Rice Lake Canoe Company with aluminum decks. Conceived no doubt to strengthen the gunwale-to-stem joint, it also prevented the all too common rot that sets in with wood canoes. As the Rice Lake Canoe company evolved into canvas canoe construction this innovation resulted, and shortly after the company was bought and moved to Montreal. Only in business 2 years, by 1928 this incarnation was finished and the remnants purchased by the Peterborough Canoe Company, moved back to Ontario and as the story goes, the forms burnt while burlap bags full of unused deck castings eventually dispersed here and there. Occaisionally these turn up in singles and in pairs, and in fact were never fitted to boats.
This example is from the Montreal days, placing it as no newer than 1926.
Unique to the Rice Lake canoes, the canvas is in fact a cottom muslin, rather than woven duck. On removing the original covering it is found to be adhered to the hull, as on applying it the hull was covered in adhesive, the fabric hand stretched, and again filled with glue before being painted and completed.  This boat was still in its original covering, though some had been removed, the rails under the decks, fasteners and stem bands were all original. 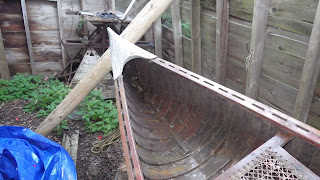 There was a time i'd wish for a picture like this that contained an antique motorcycle, but canoes have been the desired find for some time now. 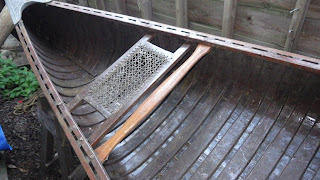 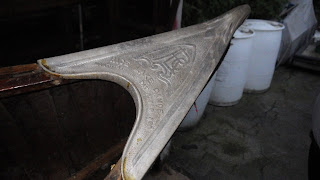 Nice ornate design cast into the deck, including a faux coaming. Dark stain seems original, as seen on the surviving examples that are known. 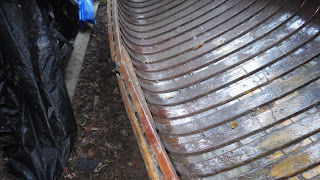 Not entirely without faults, a broken inner and outer rail, port side. The break is at the original mounting point for the rear thwart. Rails will be replaced entirely when the restoration is begun, and is about the largest undertaking in a restoration - not many canoes would warrant this kind of effort, reserved in our shop for the rare and/or historic 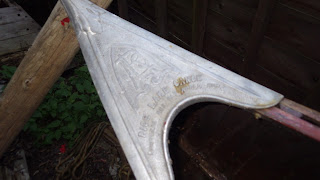 Another deck shot, to be highly polished when restored - wonder how it would look nickle plated? hmm.....