New to the collection is an original work by Fraser Thomson, younger brother of Tom. Several siblings of Toms took up painting, with his brother George being at one time the oldest practicing artist in Canada at age 97. George, Fraser and Margaret along with spouses took regular trips to sketch and paint.
Angie Littlefield has been most gracious providing information about the extended family and their talents, her website here: http://angielittlefield.com/index.html
Rather than lift the info, have a look at her site.
From an email exchange ``Fraser (1886-1968) married the Legate heiress, Ina of Owen Sound. The Legate store is still there. Fraser was a 'haberdasher' in Montreal for a while but he painted with his siblings George and Margaret almost every year in the Owen Sound environs--up to George's death in 1965. My guess is that he might have been an accomplished canoeist. I know George and Margaret kept to the land.``
Below, two shots of the Thomson siblings and family taken from The West Wind site, http://tomthomsonart.ca/ 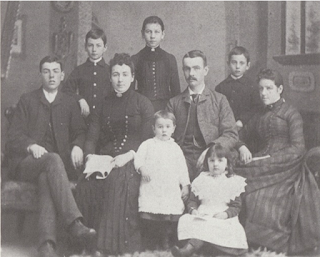 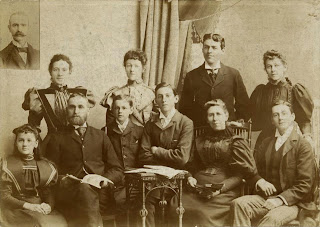 Fraser third from left front row, next to his father. 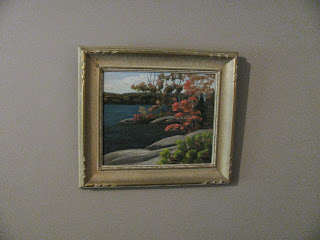 What looks to be a nice fall scene, one would assume Algonquin Park or a similar surrounding. 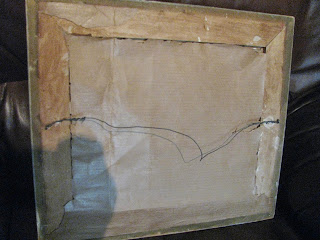 Well, the paper is ripped after all so lets see what lies beneath. 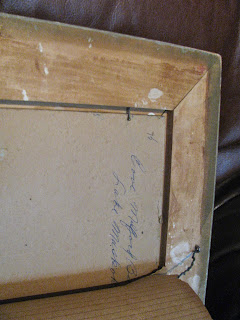 What is now known as Milford Bay on Lake Muskoka,then called Milford Cove.
Its not clear at this point if the `15 refers to the year or something else, perhaps one in a series of paintings on the trip, or who knows what. Its intriguing to think this was the year that Tom passed, however Angie provided the following thought: ``George didn't return to live in Owen Sound until after Tom's death. The painting excursions of the siblings started later--post 1926. The Legate family had money and Fraser and Ina probably visited them on a regular basis. I also see in the book that I'm sending that Fraser painted Milford Cove while staying at Miss Glass' rooming house post 1940. Is the date clear as '17 or could that one be some other number? ``

More research will need to be done, but for now its a nice link to the family and  life of one of Canada`s most talented and best known artists.
at 07:42