Peterborough Comet restoration - or 'wow do i ever hate blue paint' 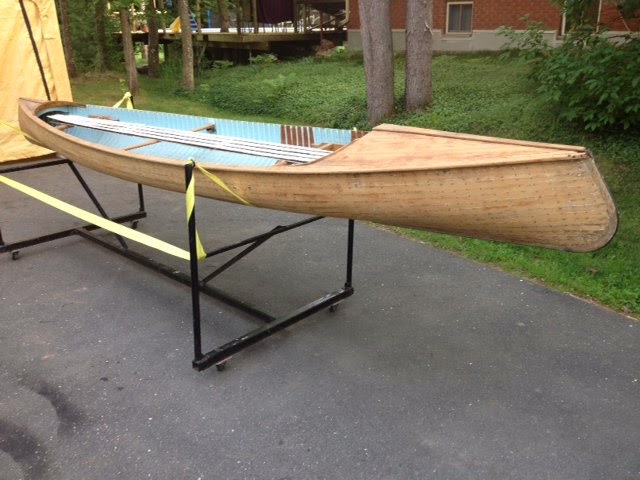 This stunning 1920s Peterborough Comet was sent to us for a complete restoration. This one is the more rare arch deck model, rather than the angular front deck as on boats such as those built by Walter Dean, among others. 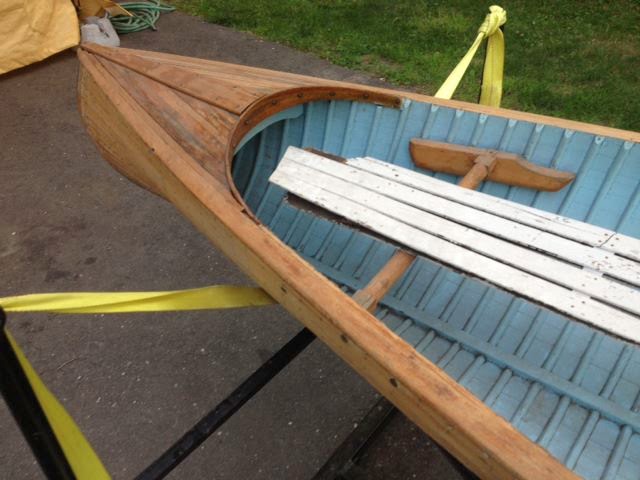 Boat is showing its age at close to 90 years old, and had one of the hardest coats of blue paint. Must have been all that lead! 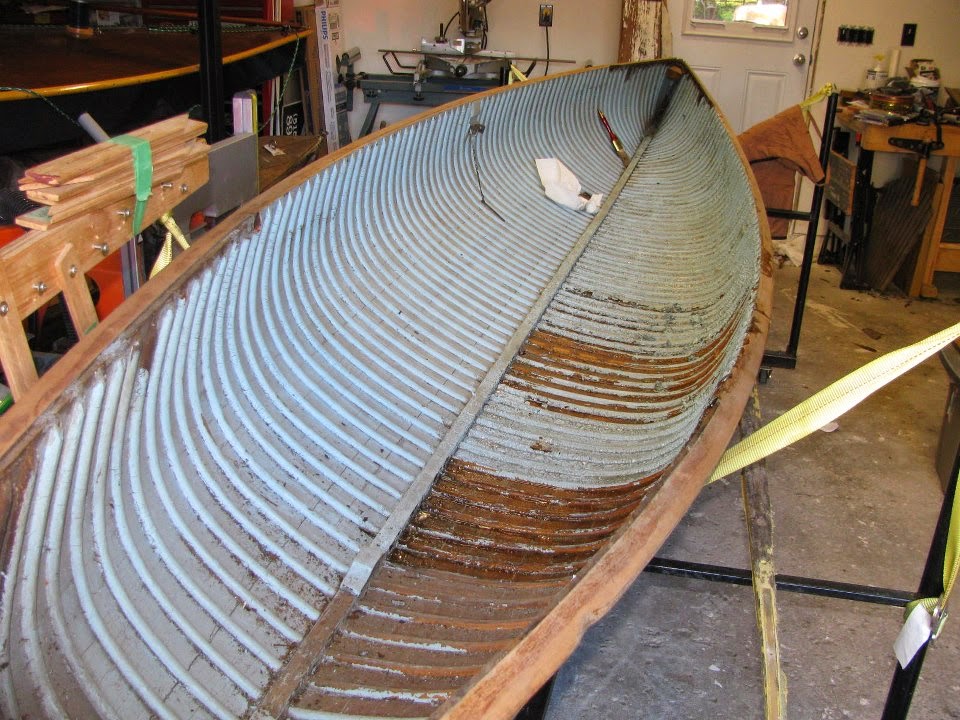 Stripping was slow, but steady. The boat had been painted white outside, and the owners had stripped most of it off. However, it was impossible to get it all off the hull, and more aggressive stripping or sanding would have damaged the hull. Remnants of paint become part of the boats history, especially as family members recount the boats history over several generations. 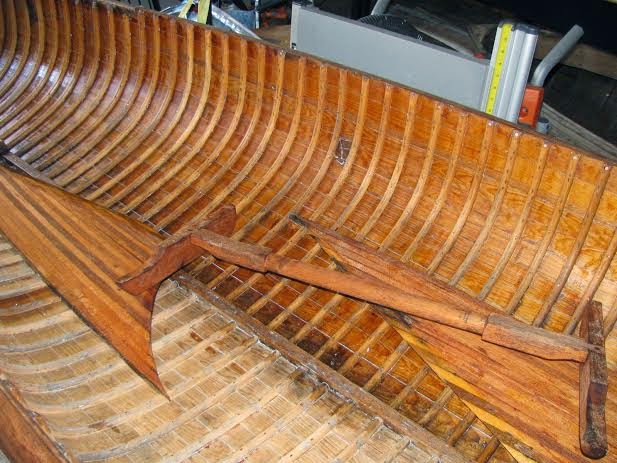 All stripped, and starting to oil after bleaching. 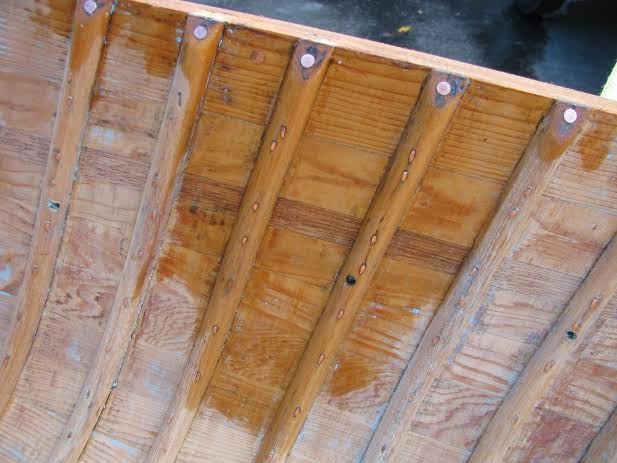 Butternut stripe. Accent stripes were usual on many cedarstrips. 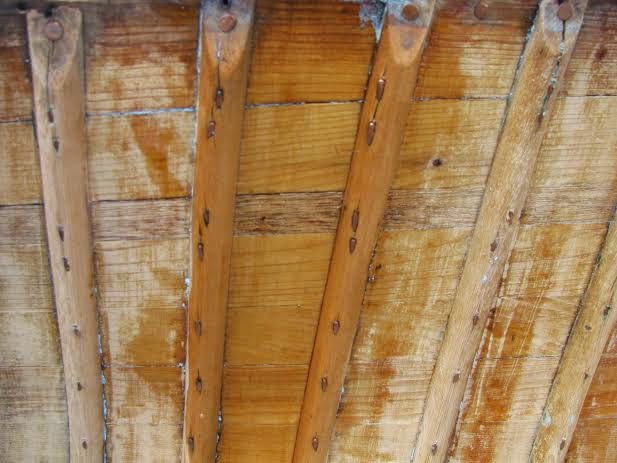 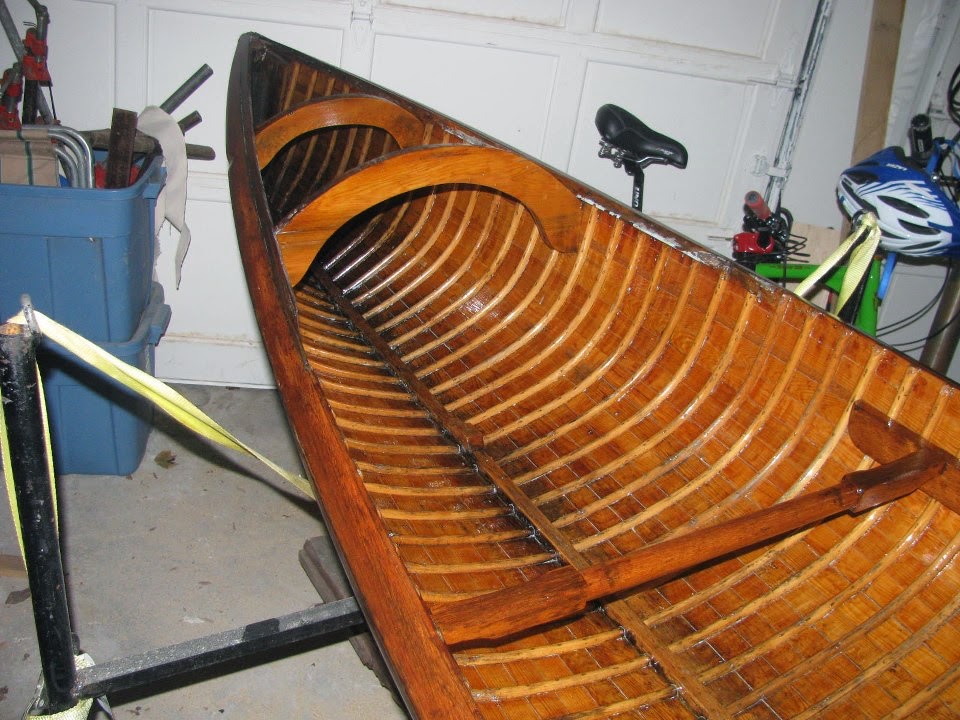 Front deck beams, onto which the decks of alternating strips of butternut and cedar were fastened with iron nails. This model was finished in butternut, with seat bars, seat frames, decks, removable thwart and gunwales all made of this light and pretty wood. 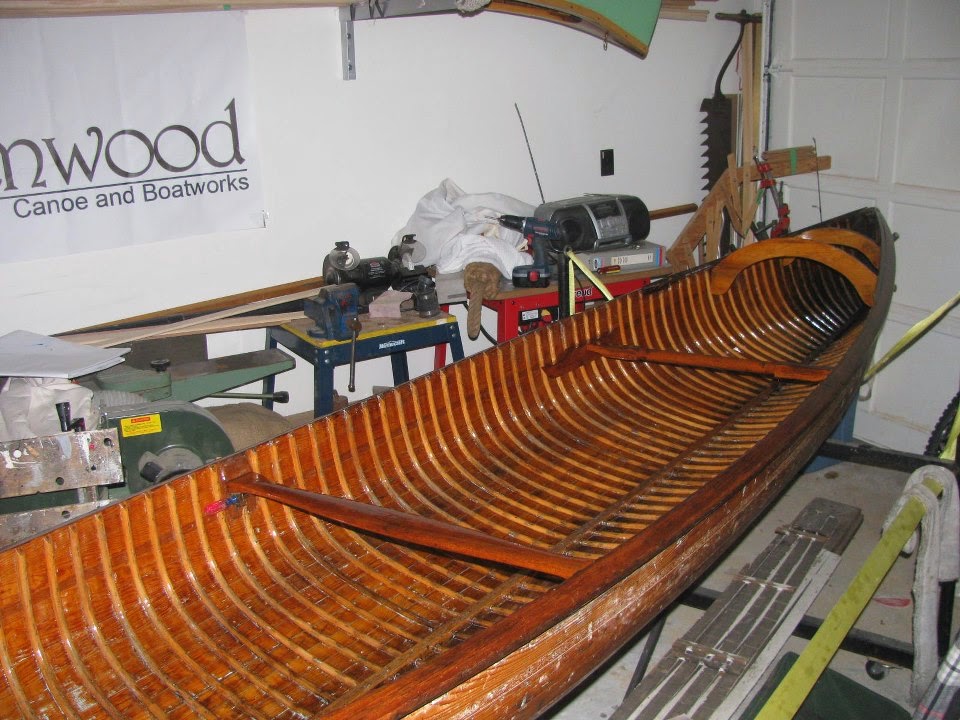 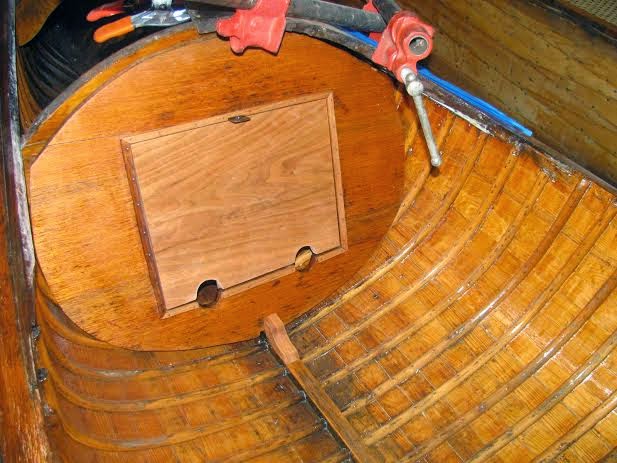 New locker door to replace missing one. These models had a locking door so paddles could be left with the boat and not disappear. Handle end goes in bow locker, and hasp gets padlocked. 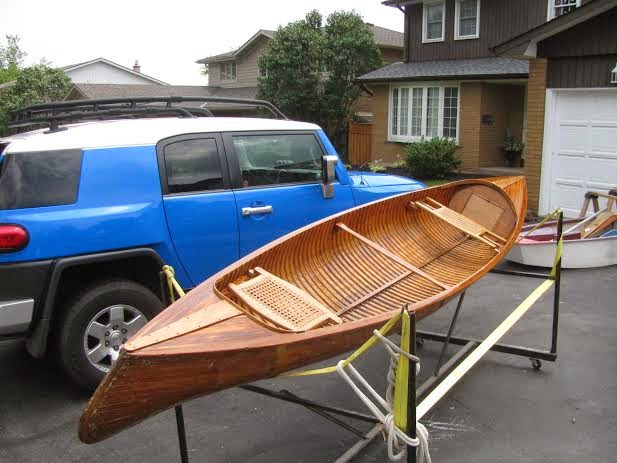 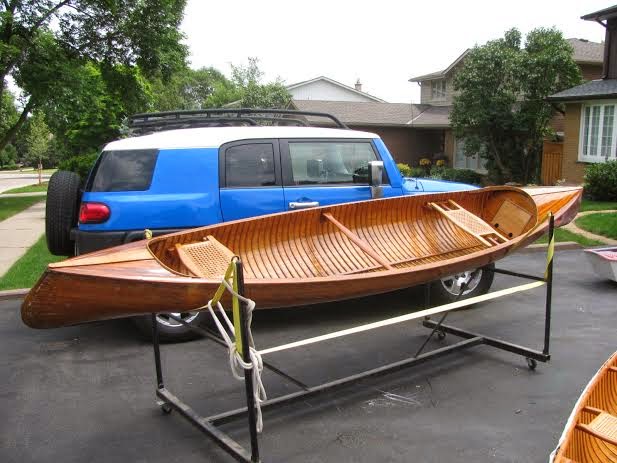 Getting its shine on. For some reason we never took a shot of the convertible seats, but they fold down into a near vertical position to function as a back rest when sitting on the floor of the canoe 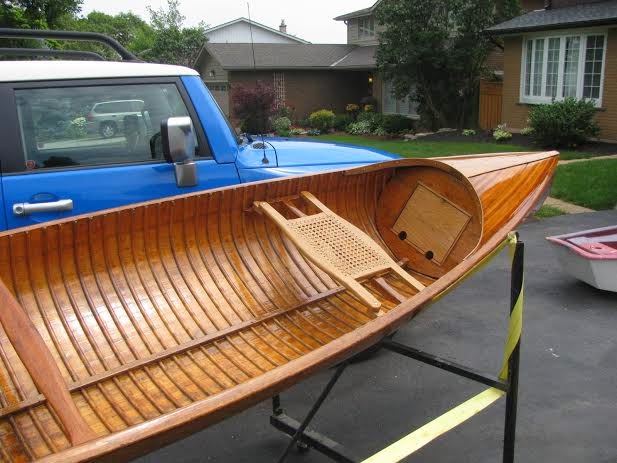 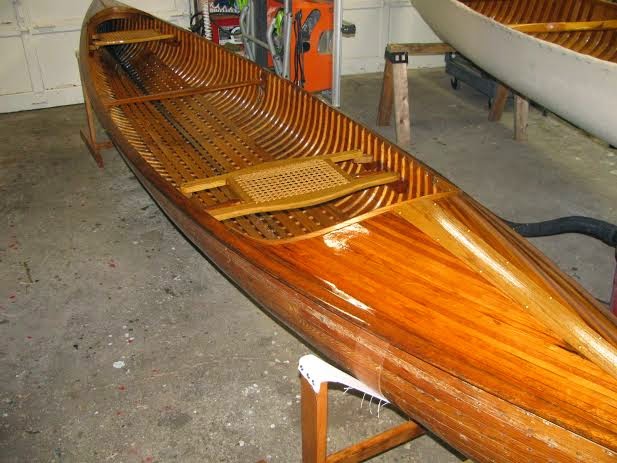 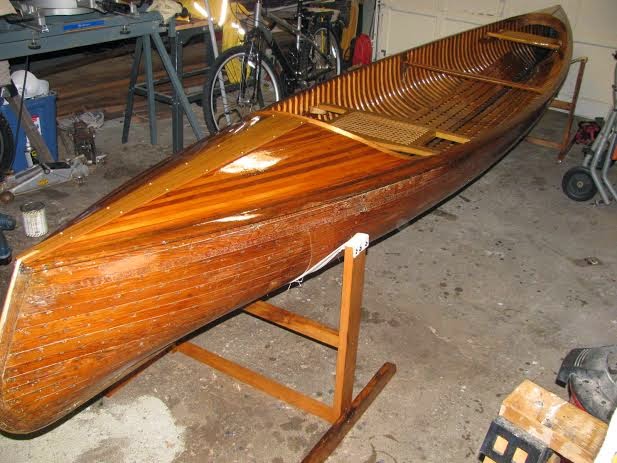 More yet. Cherry stands made for the owner to store and display their heirloom. 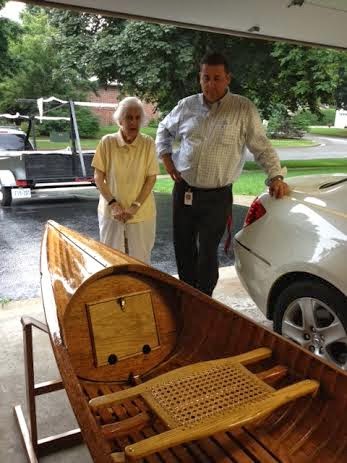 Handing off to the owner. She had many memories of this boat and her husband and family over the years, and approaching 90 was looking forward to a paddle in it, as it had not been sea worthy for decades. 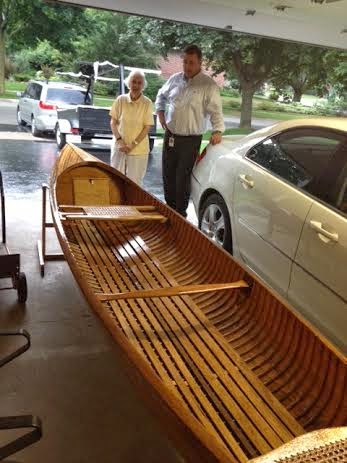 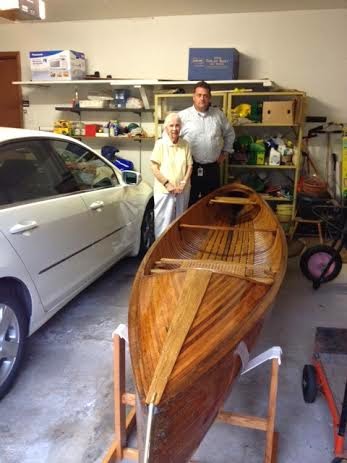