The ubiquitous Chestnut Prospector, introduced in late 1922/23, has been associated variously with wild rivers, exploring, large loads and wilderness tripping ever since. Sold also by Peterborough and Canadian Canoe Company throughout their history, as all were merged in 1923 as Canadian Watercraft Ltd, although Chestnut was the originator of the model. After the factory burned in 1921, destroying the forms used from 1905 the factory was rebuilt, and an entirely new line of canoes introduced, among them the Prospector.
Rockered, beamy and with a large carrying capacity, they were instantly popular, and enduring.
This example is surely among the earliest. Recently collected, we've not yet measured it nor discovered all the subtleties of its build. It does, however, sport 4 3/4" planking and tapered ribs, as well as very fine arched decks with a nice undercut. At first glance, a nice early example. More to follow. 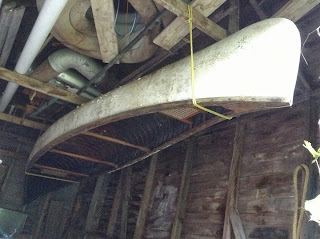 A nice, promising shot but lacking in details. Hung is always prefereable, as the boat survives and retains its true shape better than if it was on its side or on the ground. 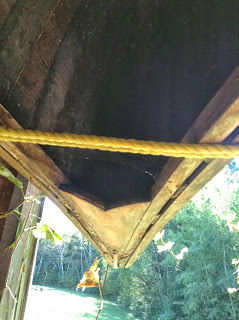 As per usual, the photos we were working off were not the best, but then sellers cant be blamed for not knowing what we want to see before driving hours to look at a boat. Finely done deck, inclulding undercut and a nice crown, all features of nice early Chestnuts 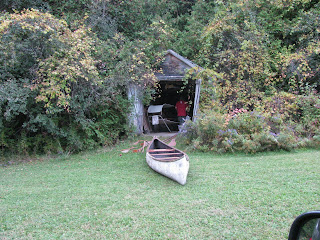 Coming out of the shed after many years storage. Boat had belonged to the owners Grandfather so had been in the family for years. 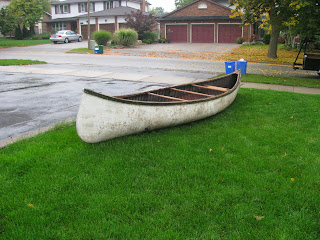 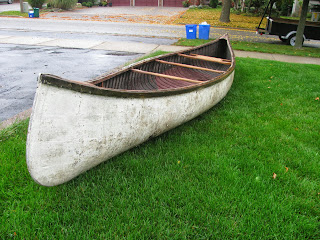 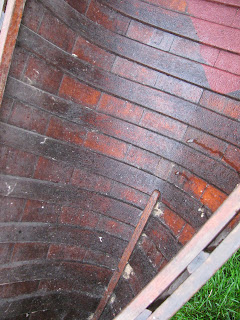 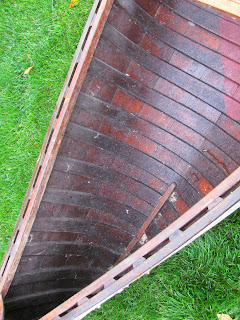 Next up: strip the fiberglass from the outside, replace a half dozen broken ribs, chemically strip and refinish.
Stay tuned....