Or more accurately, found us. Once in a while something remarkable occurs, and makes blogging a pleasure.    Below is an account of how what must surely be one of the rarest early Canadian-built boats came to be in our possession.
Much has been written about The Group of Seven, the art they produced and their effect on Canadian identity, culture and art. Inducted posthumously, Tom Thomson is perhaps one of the better known of the group, with many readily recognizable works. A relative late comer to painting, indeed the bulk of his work was done in a few short years, the majority of it done during his time in Algonquin Park.
Thomson travelled through the park by canoe, and they appear in several of his works.
Perhaps the best known and most produced image is this one, The Canoe done in 1912. 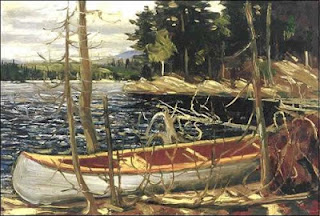 Also reported to have been done in 1912 is Canoe and Lake, another fine rendition but showing more grey like his own boat. Legend has it that his boat was a unique colour, achieved by blending a tube of cobalt blue  artists paint into regular grey enamel. We've reproduced this on one of our restorations, and it makes for a unique and fine looking canoe. 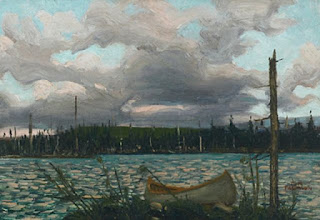 Our rendition of Thomsons 'dove grey' canoe, a unique colour that we'll soon be doing again. 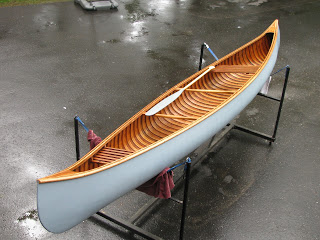 My favourite work of Thomson's also includes a canoe, and its the one that hangs in my house of all the others, Grey Day in the North, reportedly done 1913.

A while ago when posting about the grey boat above, I said "We are always on the lookout for early Chestnut canoes, and would like to find a Cruiser from before 1920, and the subsequent fire that wiped out the original Chestnut forms. When everything was rebuilt, the boats changed significantly. If you think you have one or know of one, we would be pleased to hear from you."
Much has been written about the early days of the Chestnut Canoe Company, but suffice it to say that like most canoe companies in the early part of the last century it fell victim to fire. No doubt all that wood working, paints, old buildings and lack of fire suppression contributed to many a fire. Chestnut was no strange to this phenomenon, and indeed in December of 1921 the factory burned down. Among the loss were the original building forms, on which the canoe Thomson famously used would have been built. The earliest Chestnuts were built in closed gunwale style, with one large inside gunwale, into which the rib tips were blended, unlike the later ones as seen today where there is an outer and inner gunwale, with rib tips exposed. This latter construction allows for a stronger boat, quicker build times and for the boat to be drained of water more easily. The former construction owes much of its heritage to birchbark construction.
Photos depict Thomson in both open and closed boats, which would have been built on the same form, with just this detail differing. What is certain, however, is that the boats he paddled would have of course been pre-fire, as when the operation was rebuilt in 1922 the canoe models had been changed dramatically, and many more added to the line up. Gone forever was the heavy tumblehome, high sheer and stem profile of the earlier models.
Our original statement was a bit fanciful and far reaching, as in his book When the Chestnut was in Flower on pages 86 and 87, Roger MacGregor offers production numbers for the years 1905-1907. The total number of canoes coming out of the New Brunswick factory was 848, with only 94 being Guides Specials of the 431 Cruisers built. 220 pleasure canoes were built, of which we have one, but the photos that exist of Thomson are clearly of a cruiser and not pleasure model.
Half ribs, pictured below, show up very rarely in Canadian built boats, except for some Huron canoes made by Native craftsmen in Quebec.

More common in American built boats, they fill in the floor between regular ribs and make for a smoother floor, even adding some strength to the bottom of the boat.
Some of the earliest Chestnut models, however, had them. The Cruisers were later built 'close ribbed' for extra strength, with larger ribs placed closer together. Before this , however, the earlier boats had half ribs, as Roger MacGregor again informs us that:
" Realizing that on rough, rocky streams there is need of a canoe practically indestructible, we build a 2nd grade canoe with half or "short" ribs between the long ribs, placing the throughout the entire length of the canoe. This so stiffens and strengthens the bottom that the canoe will withstand almost any amount of hard usage, and is essentially the craft for canoeing on rocky streams in low water."
This was in the Cruising model canoe, which was better suited to wilderness travel and sporting pursuits, owing to its design and capacity, more so that the Pleasure model.
This background illustrates the subsequent rarity of these early boats, as not only built in comparatively small numbers, they would have been subjected to the hard use for which they were intended. Indeed, like many things collectible or sought after, they were never intended to be, nor viewed as something to be preserved or coveted. Indeed, hard use was their fate and combined with a century passing, few if any would have survived. Enter the internet, and a chance contact, the reason for which we say that this canoe 'found us' and not the other way around.  When we posted that we would like to find one, it was never anticipated to see one found, as even if one existed the owner would likely not even identify its maker or model. Indeed, this was the case.
We were contacted over the internet by someone that sent 2 fuzzy pictures from a camera phone, and eventually recognized the photos from a classified ad offering a canoe for sale. We ignored it the ad, like so many others for unremarkable boats, usually built in the 1940s or newer. Below is a photo as posted in the
ad. 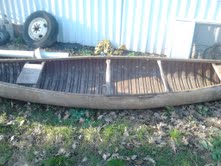 Worse yet, it looked as if it had been poorly repaired, or possibly fiberglassed. 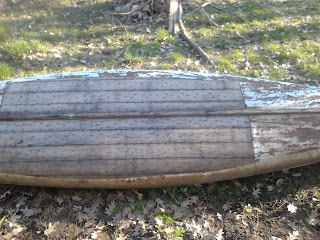 Definitely nothing we'd be interested in, time to move on.

When the owner sent us the shots, we asked did they want it restored or were they selling it. They said they wanted to sell it, so we requested more photos, still not interested but mildly curious, since you never do know.  What followed were some shots of a very early, closed gunwale boat with half ribs. 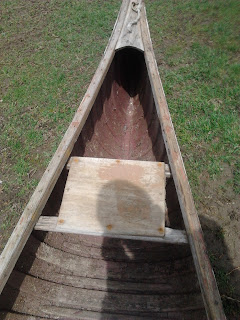 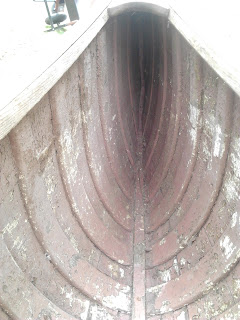 Now our curiosity was in overdrive, as only the earliest Canadian boats were built with closed gunwales, however the half ribs were baffling at first. Enter Rogers thoroughly researched book, along with help from Dick Persson of Buckhorn Canoe, the foremost authority on historic Canadian built canoes and boats.
A drive to Cambridge, Ontario produced this very early Chestnut No2 Guide Special, 16' and in remarkable original shape, still wrapped in its original canvas.
The seller had assisted in the demolishing of a barn in Guelph, Ontario and this was the sole remaining item in the barn. He had suggested it might make a great set of bookcases - thankfully he had not taken the initiative to cut it first, as sellers will often do. As stated above, he was totally unaware of the boats significance and origins. 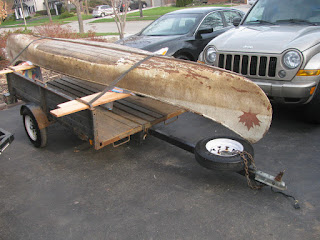 The Cruiser as it arrived home, a trip of only 30minutes, but a good distance from its birthplace of New Brunswick 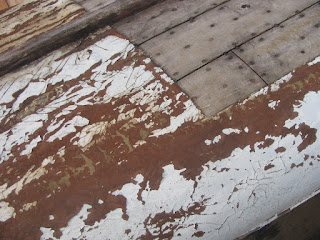 What appeared to be fiberglass or repairs in the original photos as an area where the seller cut away the canvas, exposing the copper tacks. 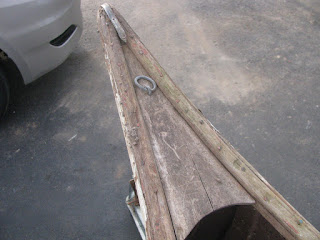 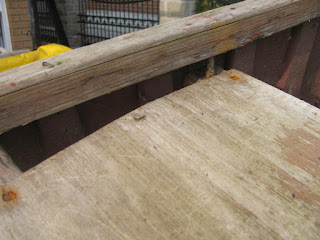 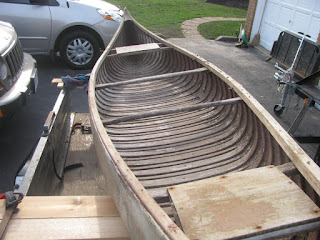 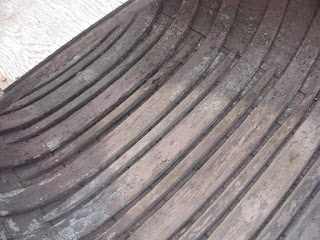 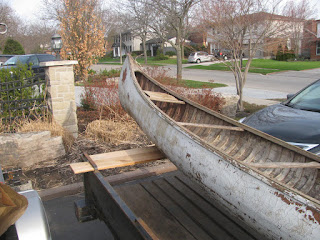 Lots of tumblehome, and nice sheerline 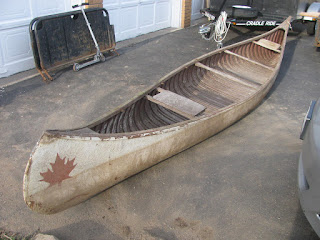 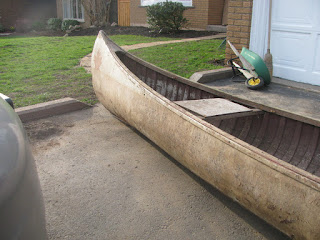 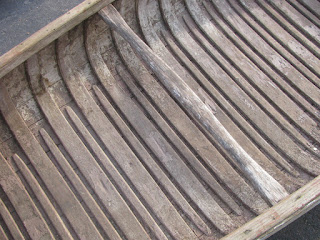 Slender rear thwart and half ribs, very rare in a Canadian canoe 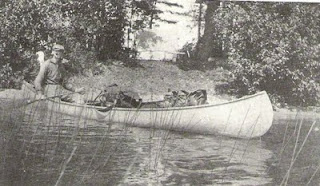 The familiar shot of Thomson in his canoe, loaded and ready to head out. As mentioned earlier, his boat has the unmistakable profile of a Chestnut Cruiser, quite unlike that of our restored Pleasure model. 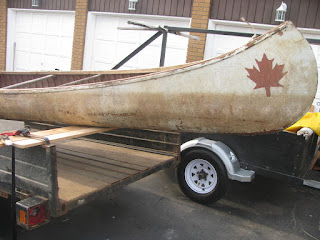 Although tilted to one side, this shot removes all doubt about what boat, and indeed what model Thomson paddled. 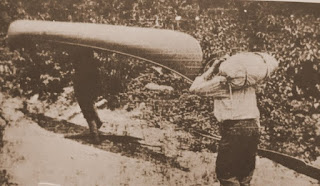 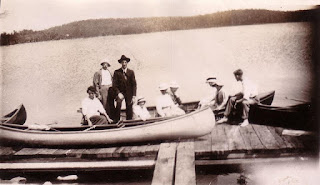 Recently discovered shot what is believed to be Tom's canoe with Shannon Fraser, at Mowat Lodge 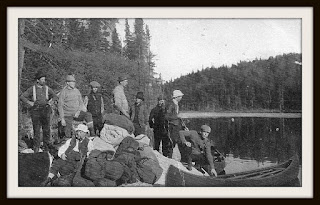 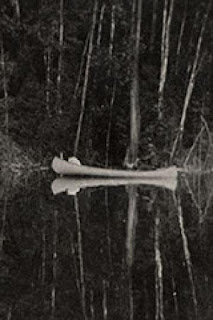 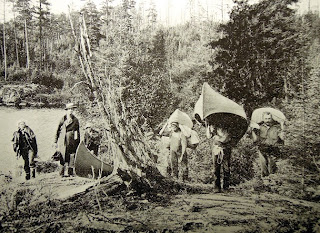 Hiding around the tree, the end of what looks to be a Chestnut Cruiser.

What's next? We will be lofting the hull and proving the lines, and constructing a building form in order to produce copies. After that, many trips into Algonquin tripping with the same gear as would have been current in the 'teens, touching history.

Concerning the colour of Thomsons boat, lore has always held that he used a tube of cobalt blue to achieve what has been deemed a 'dove grey' colour. In Roy MacGregors book Northern Light, he states that "... yet Thomson made his even more noticeable by mixing a $2 tube of cobalt blue with a standard Marine grey in order to paint his new canoe a "dove grey" colour - perhaps to distinguish his form the common reds and greens of the lodges and various cottages." This is describing his canoe purchased in 1915. 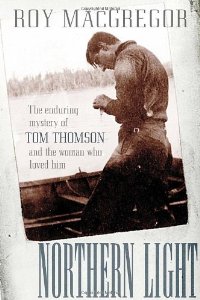 He also says later that "...Tom had deliberately painted his beloved Chestnut canoe a dove colour..."
Considerable research has been done by Roger MacGregor regarding the colours used on some of the earliest of Canadian canoes, including the all wood ones, often the paint grade basswood canoes. He was kind enough to share, and while no palette exists, the names bear witness to the variety of the full spectrum of colours used. In his work on Chestnut canoes, "When the Chestnut was in Flower", he notes that "The cruisers were likewise most often done up in red or green, though during these seasons (referring to the period 1905-1907) one cruiser was done in each of Emerald Green, Light Green, Blue, Yellow, Robin-Egg and Slate. The dull tones were used on cruisers somewhat more frequently at this time; 27 were done in Dead Grass and 24 in Lead in the three seasons recorded by this book." 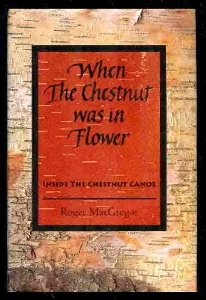 Although I've read and enjoyed both books countless times, until now I'd not thought to look further into the legend of the dove grey colour until now. Looking at a colour chart from Kirby's paint, a long time manufacturer of paints in Massachusetts, there are some interesting colours. Kirby's is noteworthy among builders and restorers for manufacturing paint in many colours from long ago, and will custom mix as well. I've no interest in debunking history or Thomsons efforts, but its interesting to note that Lead and Slate were known to have been used. If Thomson painted his canoe, perhaps he had seen an earlier Cruiser elsewhere and been inspired.  My boat, in its original canvas, at first glance under the more recent paint appears to have  been a brownish colour, but more investigation will be done as time permits. 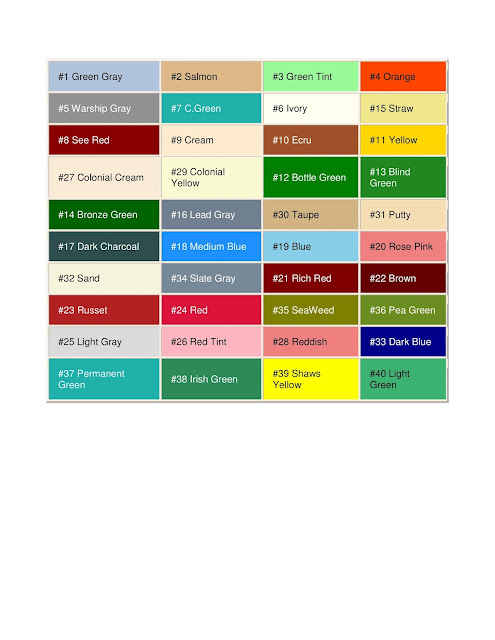