In March of 2007, I participated in the first build of the hard chine 16\30 sailing canoe at the Antique Boat Museum in Clayton, NY. Then curator John Summers had documented a surviving example and developed the boat for modern stitch and glue construction. I had been corresponding with him on the first sailing canoe I had collected, and he offered me the opportunity to build a new 16/30; I sent my deposit immediately.

Below is a shot of the fleet of these boats built by Fred Gilbert in Brockville. The boats constituted a sort of One Design for members of the canoe club to race against one another.
Below is a fantastic post card of  the Gananoque Canoe Club in the Thousand Islands area of Eastern Ontario, which saw much sailing canoe development, racing and general use. On the dock is one of the hard chined 16/30s. John Summers graciously shared this image he discovered.


On arriving at the ABM to begin construction, John had by this time completed the major work on the first hull, which was on site to provide inspiration as well as act as a reference point during construction. Awaiting paint and sails, it was ready to go. 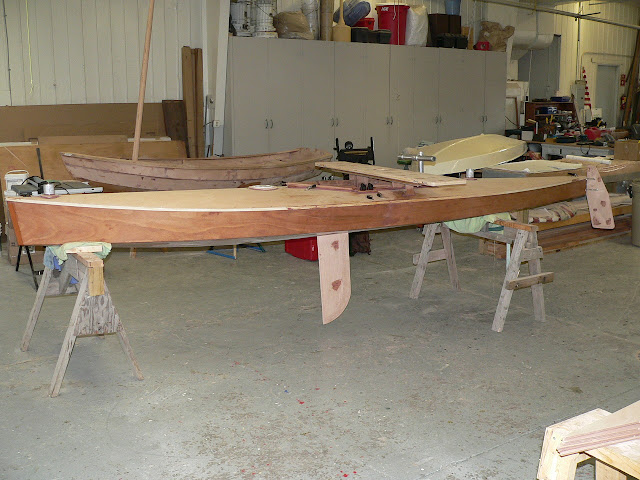 My own hull, September 2007, 7 months later at the Killbear Paddlers Rendezvous. Having been sailed previously at the ABM boat show in August, it was now time for me to get on the learning curve. 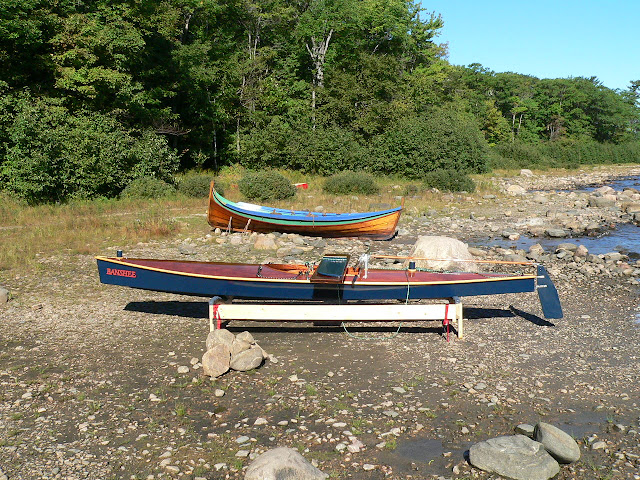 The ABM workshop was wonderfully equipped, large and warm for boatbuilding in March. Day one saw the stitching of plywood panels begin immediately after brief introductions and a run down of the impending schedule. 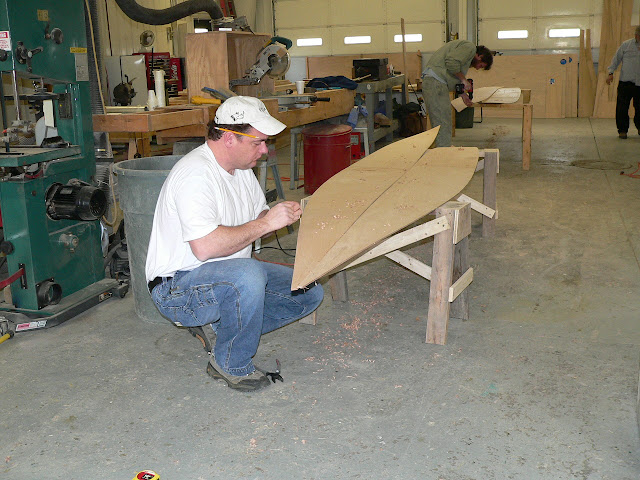 Quickly the shape went from floppy banana to boat hull with the addition of the sides. 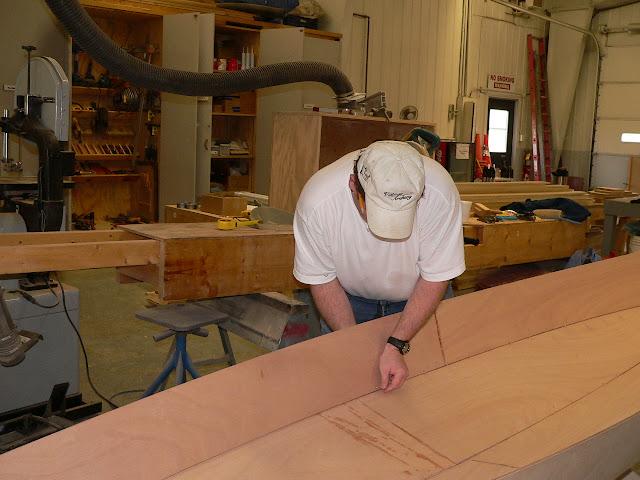 With stitch and glue construction the boat derives it shape and rigidity from bulkheads rather than traditional framing. Ulitmately it provides a hull that is much more stiff and maintenance free. 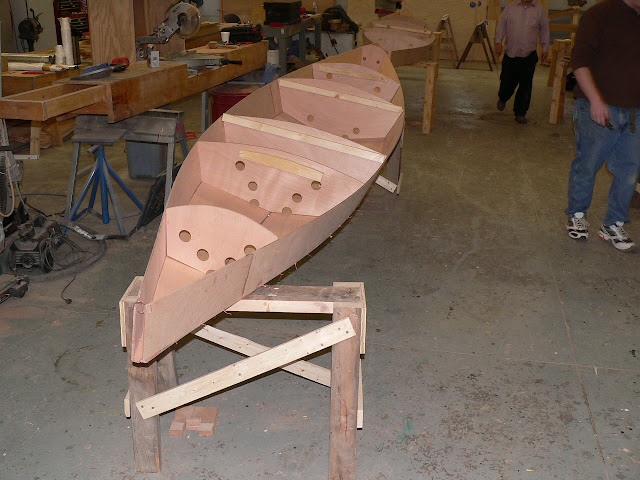 Once the hull is trued up it needs the seams filleted and fiberglass taped, which strengthen and lock the shape in place. 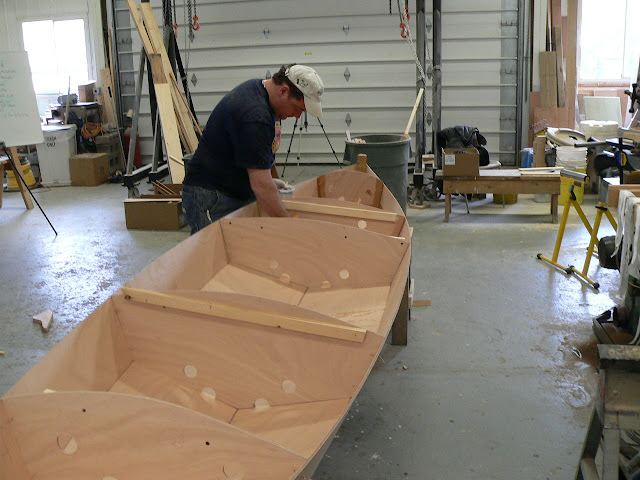 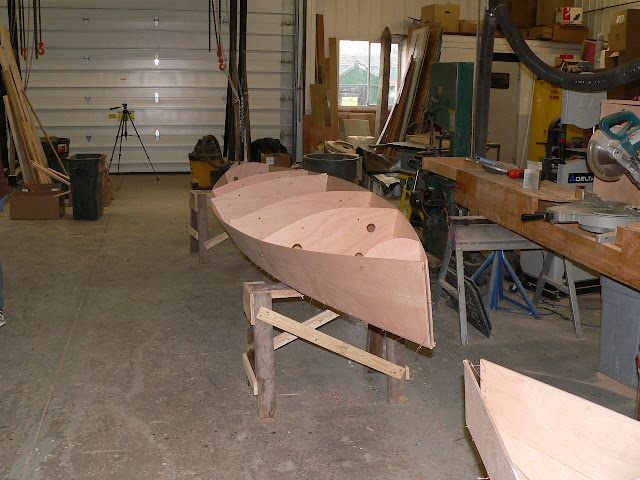 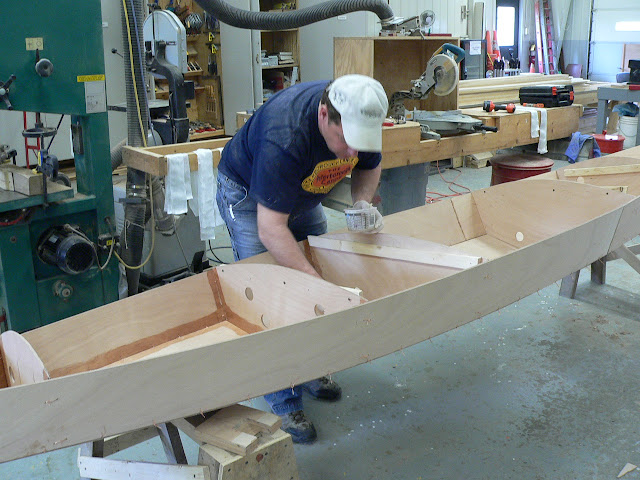 A nice shot of the Kingplank, in which are located the mizzen mast tube, along with the post for the norwegian tiller, which is peculiar to these boats. 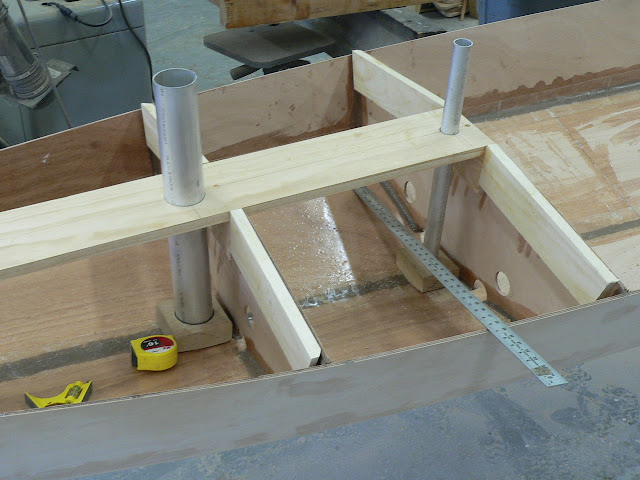 Along with bulkheads and taped seams, the hull is covered in  a layer of fiberglass cloth saturated and filled with epoxy. 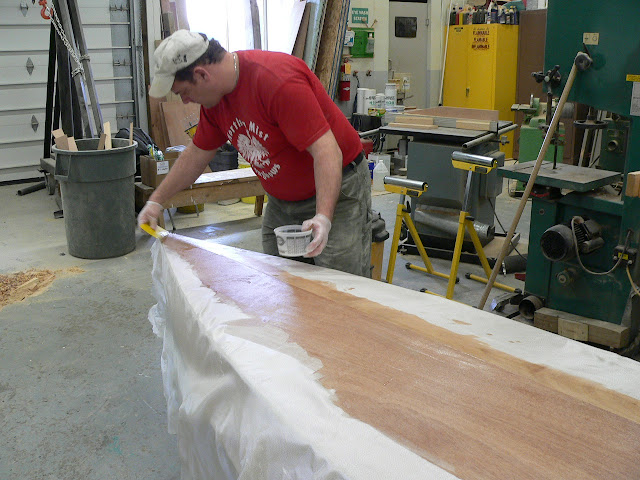 Gunwales and doublers in place on the rear bulkheads, the front has been notched out and is waiting for kingplank and mast tube. 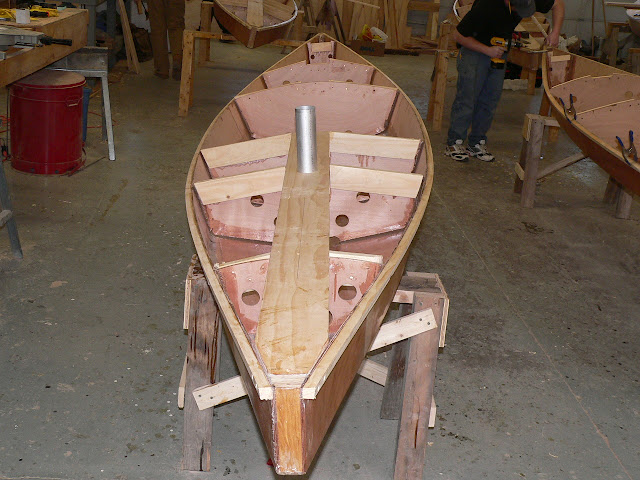 The happy day when the sails arrived. For the first time we realized what 90sq ft of sail spread on two masts looks like on such a narrow hull! 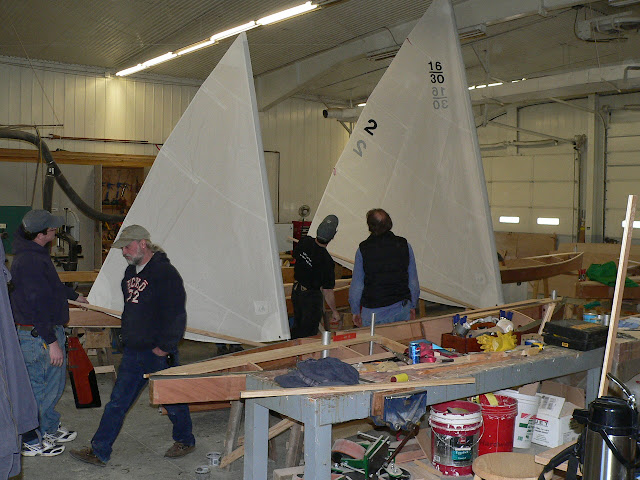 Cockpit floor, and centerboard trunk in place. Hull is self draining through slot with floors angled down to center 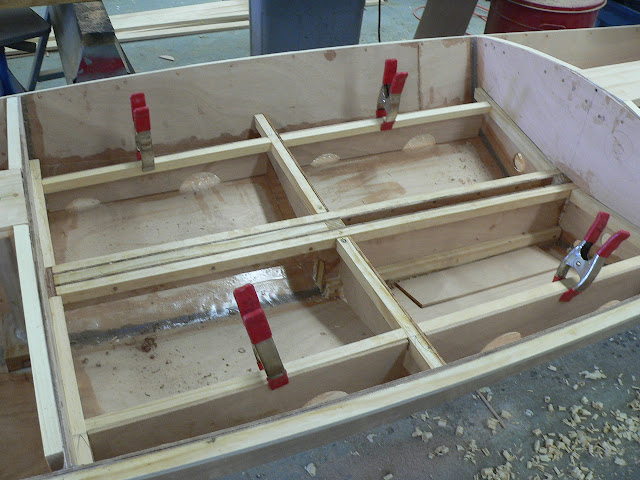 Difficult to interpret Johns expression here. I would like to say approval, but disbelief seems more likely. All boats progressed at roughly the same rate, and are ready for decking after being sealed with epoxy once more internally. 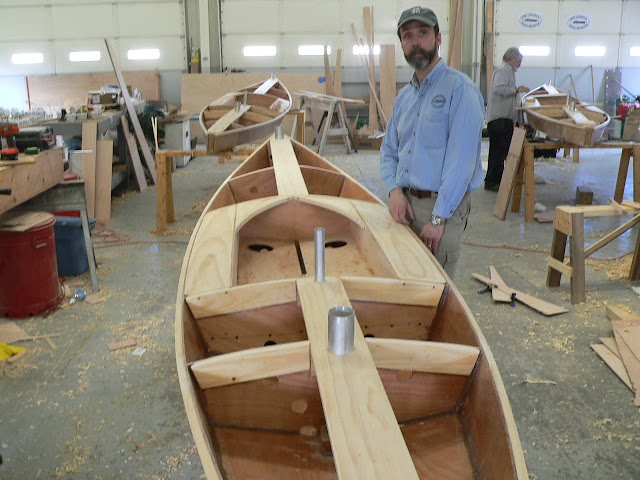 Ready for the ride home, with decking secured  but not installed. My plan was for a bright finished top, and painted hull as would not have been out of place on a period boat. 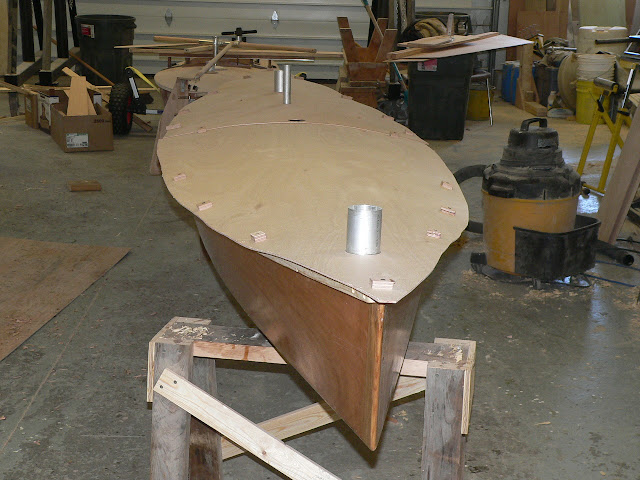 The finished product, ready for sailing. The boat turned out wonderfully, and its a safe bet that there wont be any others at the majority of boat shows. 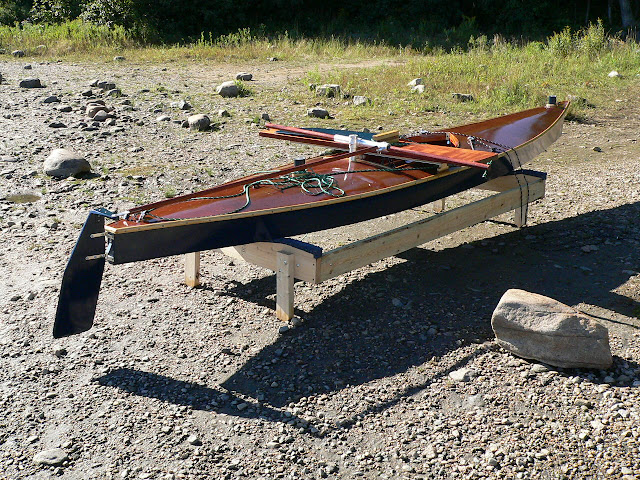 30th WCHA assembly at Keuka Lake NY, where the theme was sailing canoes.
four 16/30s showed up, all but one from the first building course. 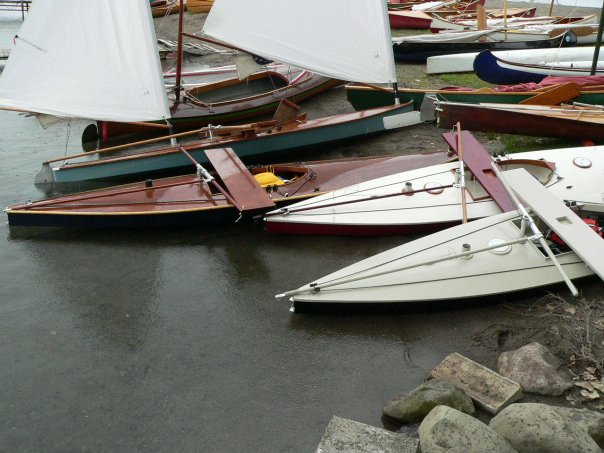 Likely the largest gathering of sailing canoes in many decades. 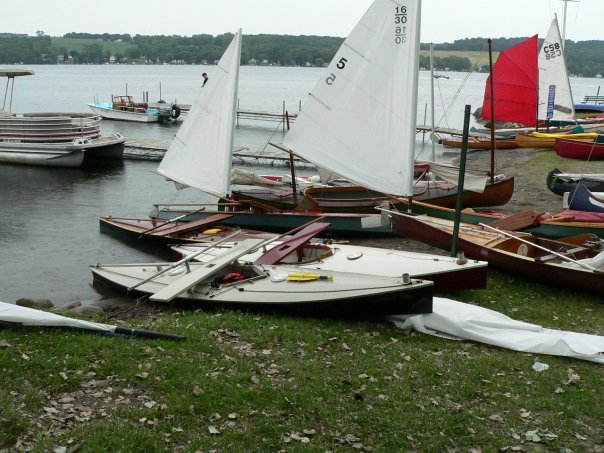 Equipment failures happen, whether new or antique. A broken spar disabled this one, all a part of using and racing boats. 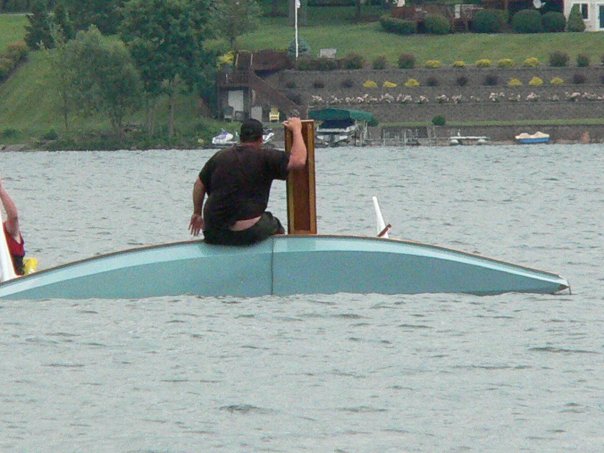 A calm moment on Keuka Lake, in the finger lakes region of NY. 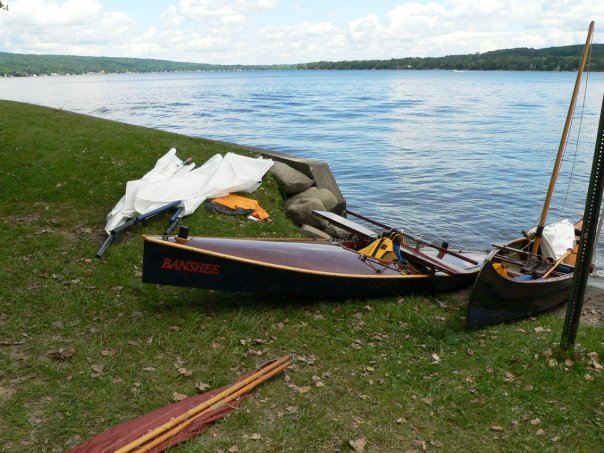