Our luck has continued, and in part turned on a seller stepping up to honour a deal made in the face of subsequent offers to purchase out from under us. These days it often seems this kind of character is in short supply, but a good home and a proper restoration of this rare boat were the main concerns. Our approach has always been transparency, and often that involves correcting oral histories. Thought to be built in the 1930s by the most recent owners over the last 40 years, Strickand was actively building between 1892 and 1904, at which time the Lakefield Canoe company was born.
Below is info shared by Dick Persson of Buckhorn Canoe Company, taken from an earlier web posting:

The company Strickland & Co – Lakefield Canoe Works, was established in 1892 in Lakefield, Ontario by Robert Strickland and his son George Arthur.
Robert Strickland was a son of Lakefield pioneer Samuel Strickland and a nephew of the well-known authors Catherine Parr Traill and Susanna Moodie.
George had previously worked for the Lakefield canoe builder Thomas Gordon as well as independently on a small scale.
With his father living in England, handling the sales for Europe from the company offices in West Drayton, Middlesex the company quickly became very successful. The company exported during its first six years more than 600 canoes to England alone.
The company merged with Thomas Gordon Canoes in 1904 and became Lakefield Canoe & Mfg. Co.
This canoe was therefore built sometime between 1895 and 1904. This style of canoe, later often called the queen model, with alternate strips of light and dark “fancy” woods became very popular especially after the company’s awards at the Paris Exhibition in 1900. The planking is likely white cedar and red cedar, but other combinations were popular as well, e.g. walnut or mahogany against butternut or pine.

We cant say for sure which woods are used, as this boat received a coat of fiberglass cloth and polyester resin sometime later in its life. Ironically, this often protects the boat and preserves the hull shape, and would otherwise be distorted and possibly lost with hard use and improper storage. 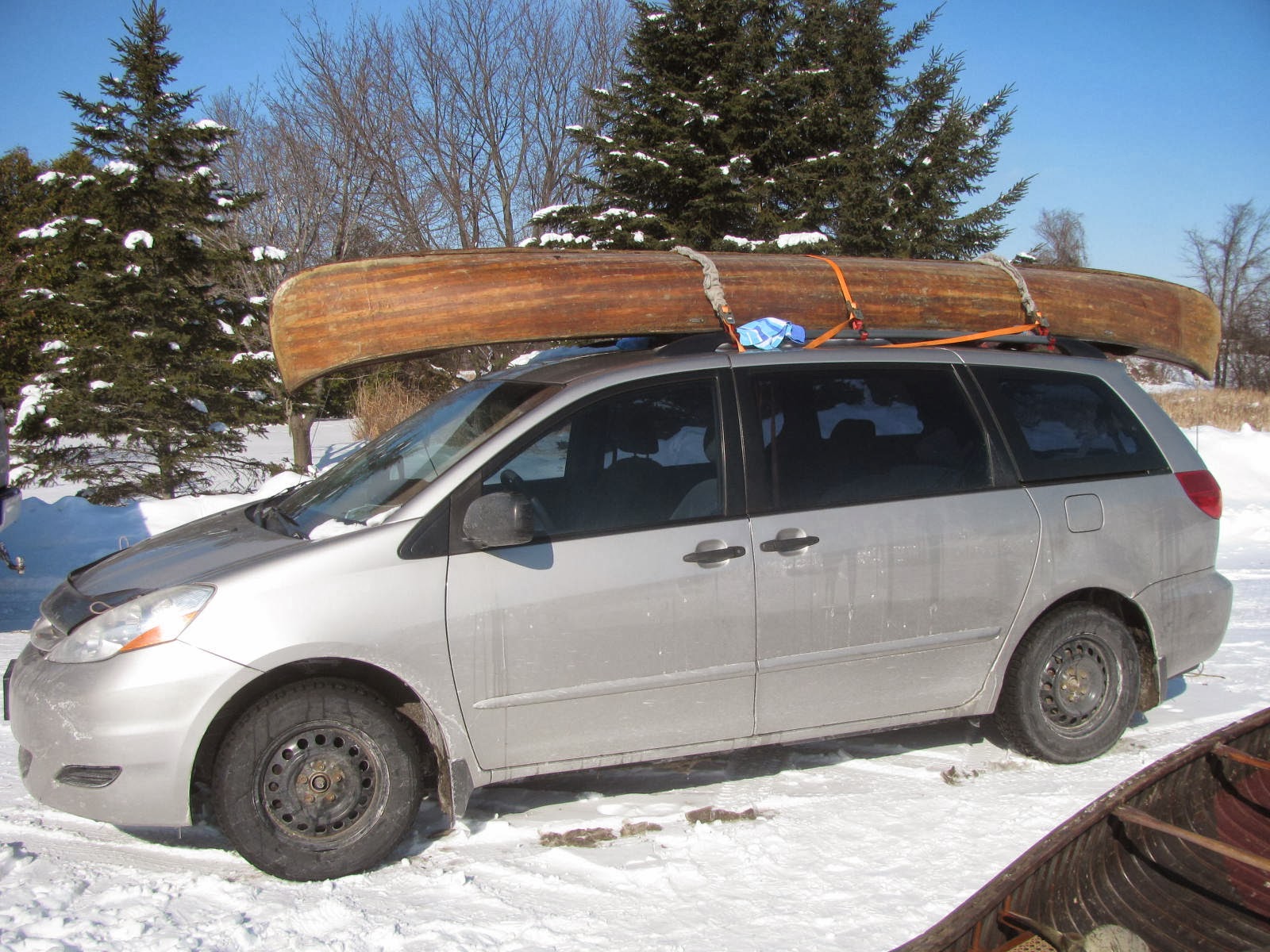 Sitting on top of the van, ready for the trip home. 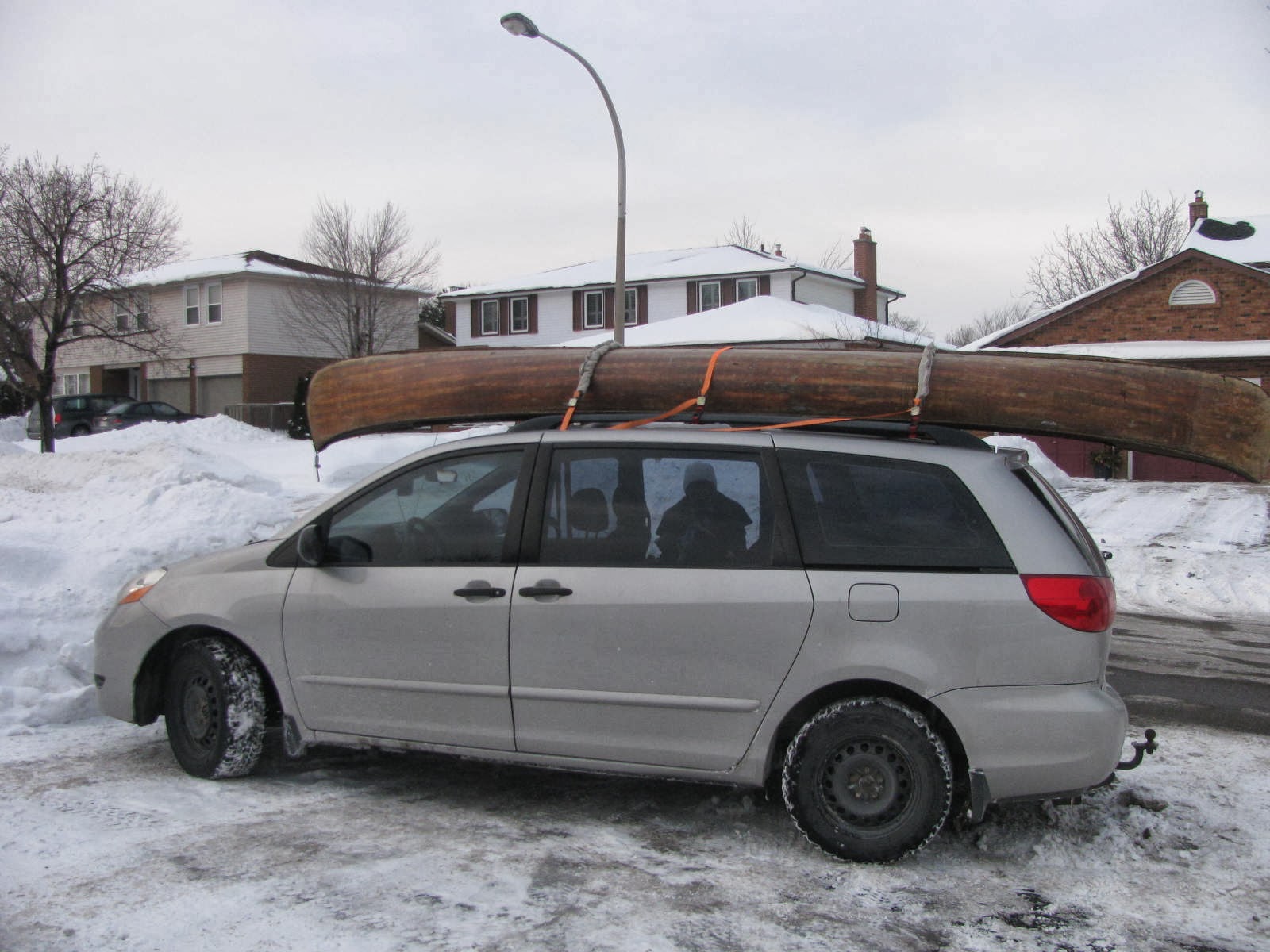 Safe at home, it was getting dark so the photo opportunity shrank fast. We'll have it out in the spring to shoot it in more detail. 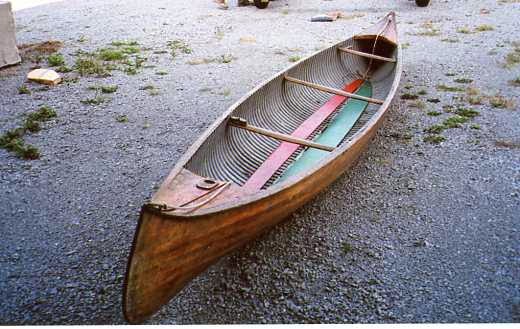 Typical of 100+ year old canoes, the interior is painted, the outside 'glassed, and lots of work required including stems, gunwale, keel, keelson, but its rarity makes it a worthwhile endeavour. 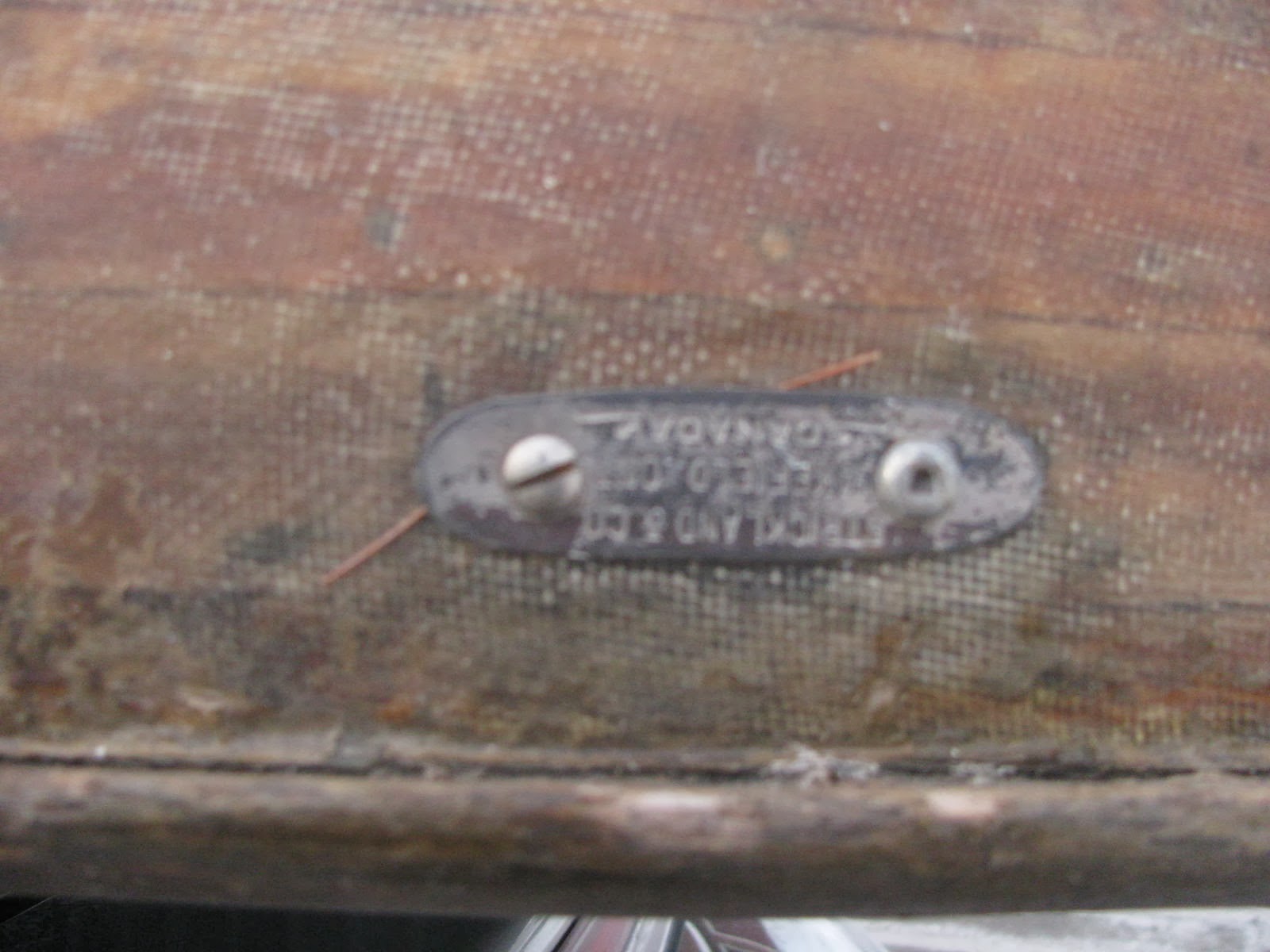 All six nickel plated thwart tags are in place 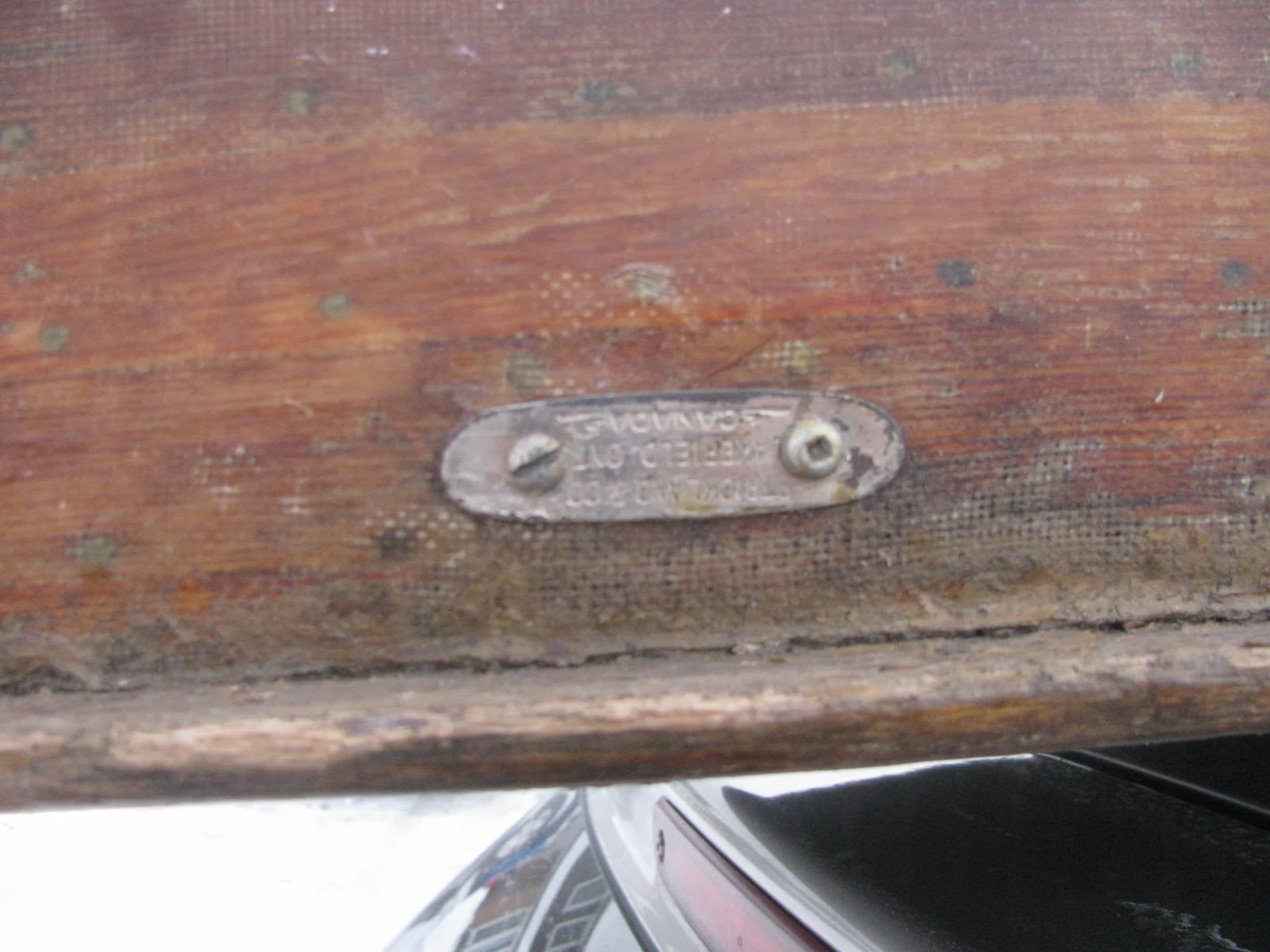 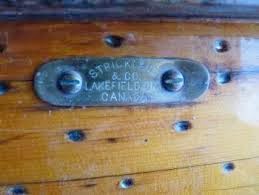 Above is another Strickland thwart tag as seen on the web

A Strickland in the UK recently restored. Beautiful canoe, however the end caps on the decks at the stem tops is not correct, most likely put on to conceal rot damage rather than renovating the damaged parts. In this photograph, the alternating strips of wood are very noticeable 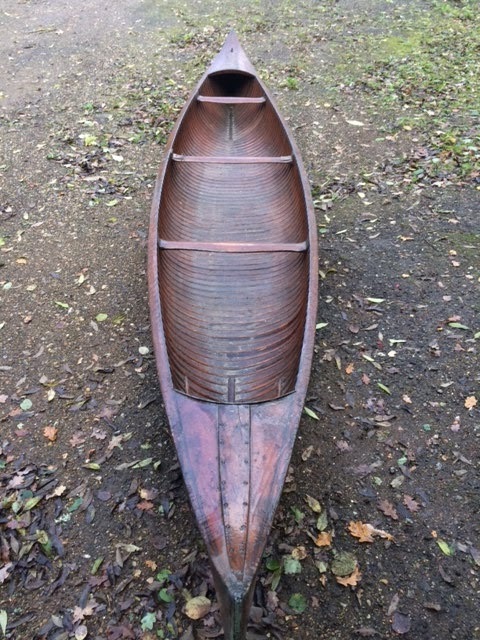 Another boat from the UK, found is classifieds for sale, described as a Strickland. If so, it would be a very early one as it has no keelson and so no outer keel. Could also be a Thomas Gordon, or one of another manufacturers unless identified by thwart tags. Unfortunately the ad did not show if these were present. 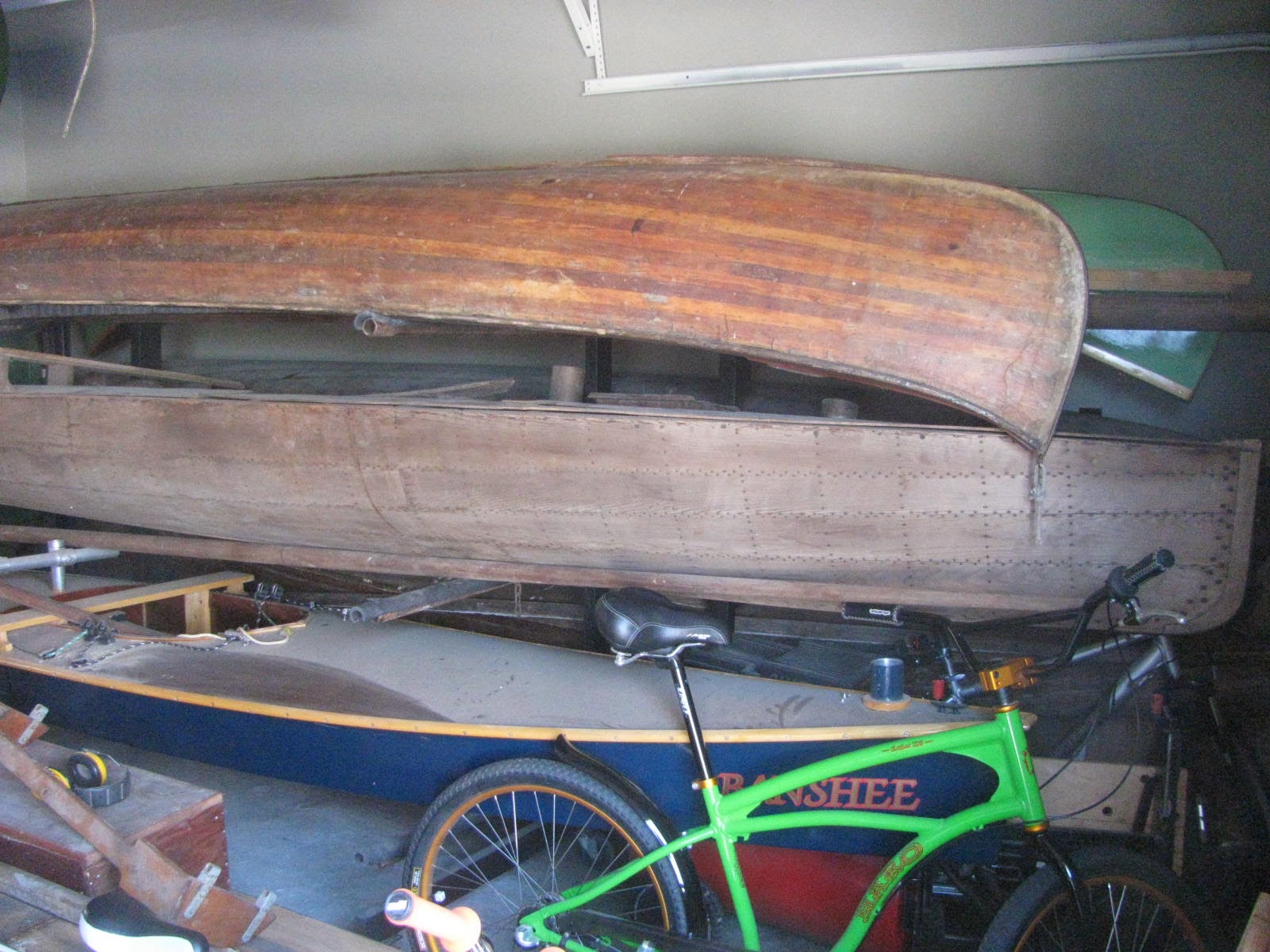 Racked and waiting, it joins the racing sailing canoes till it comes down to be restored. 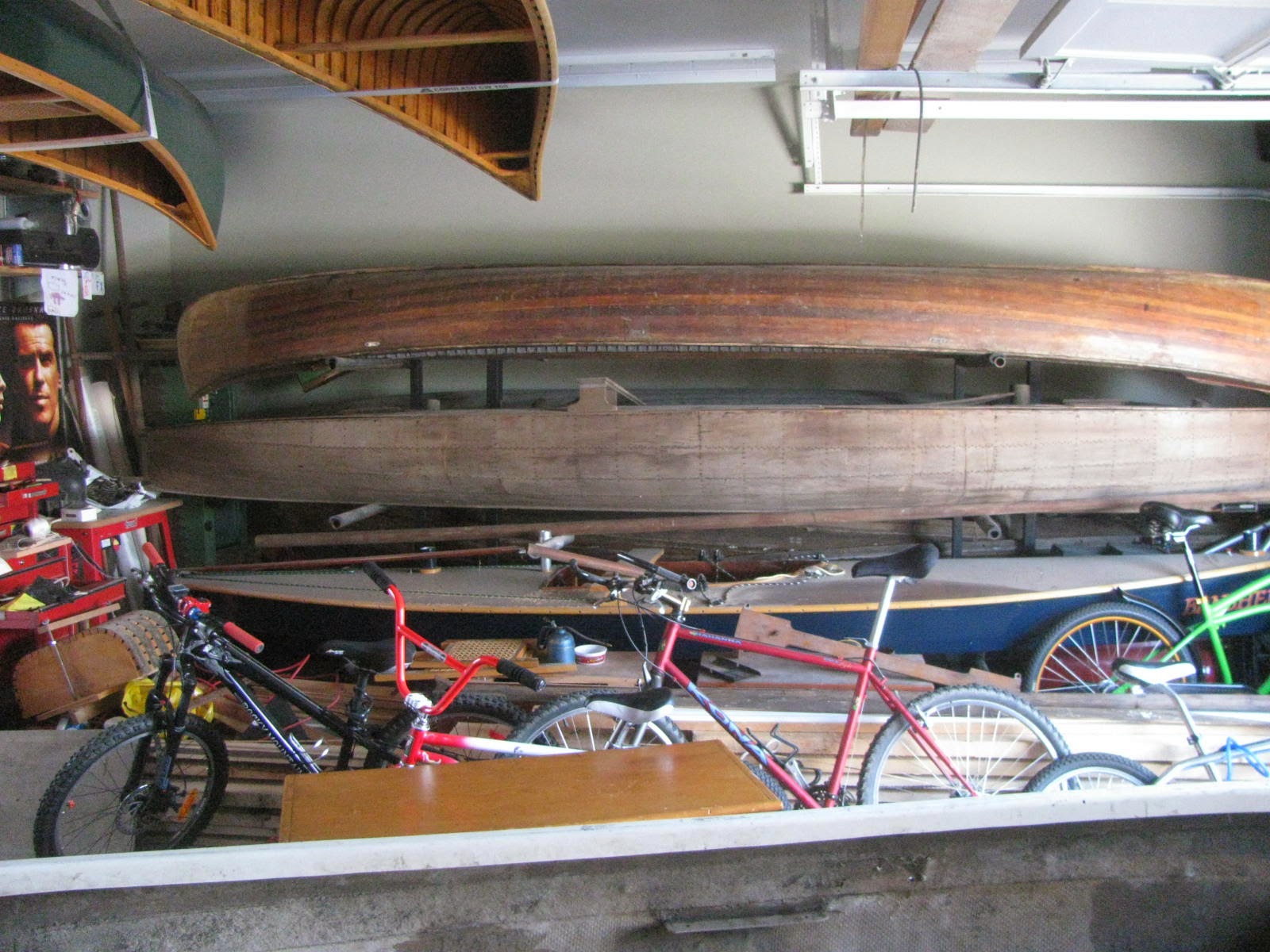 Cant wait for spring, so i can build a tool shed to house the bicycles!
at 15:26