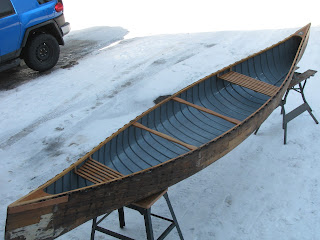 Pictured is a 1977 Chestnut Prospector, with a painted interior in the tradition of the old workhorse freighters. The canoe has new cherry thwarts, decks and slat seats. Next it will be canvased, filled and painted.

With Chestnut closing its doors forever in 1979, this is from the final years of production, and has held up well. Finished in a new canvas and painted a dark green with white Chestnut script decals, it will be a tremendous boat for extended tripping, or just paddling lakes and rivers. It also has the correct factory decal on the bow from the Oromocto NB factory where operations had been moved from Fredericton.

Acquired as a wreck, it was destined to be cut into bookshelves, as common fate for wood boats that are no longer serviceable. It was, however, in terrific shape despite some rot to the decks and gunwale tips and missing seats and thwarts.  Now fitted with slat seats per the originals and trimmed in cherry with ash inner and outer gunwales, it will be ready for adventures once again. 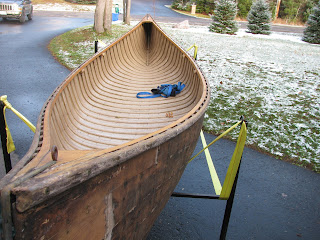 Nearing completion, the prospector will get a final coat of dark green before new gunwales and stem bands are attached, and white Chestnut script decals. 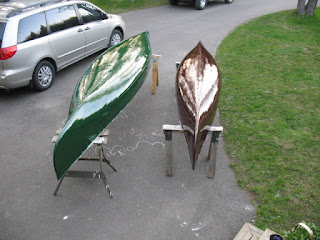 Update: Sold, gone to a new home in Central Ontario 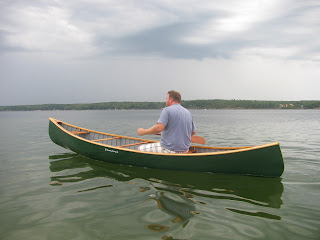